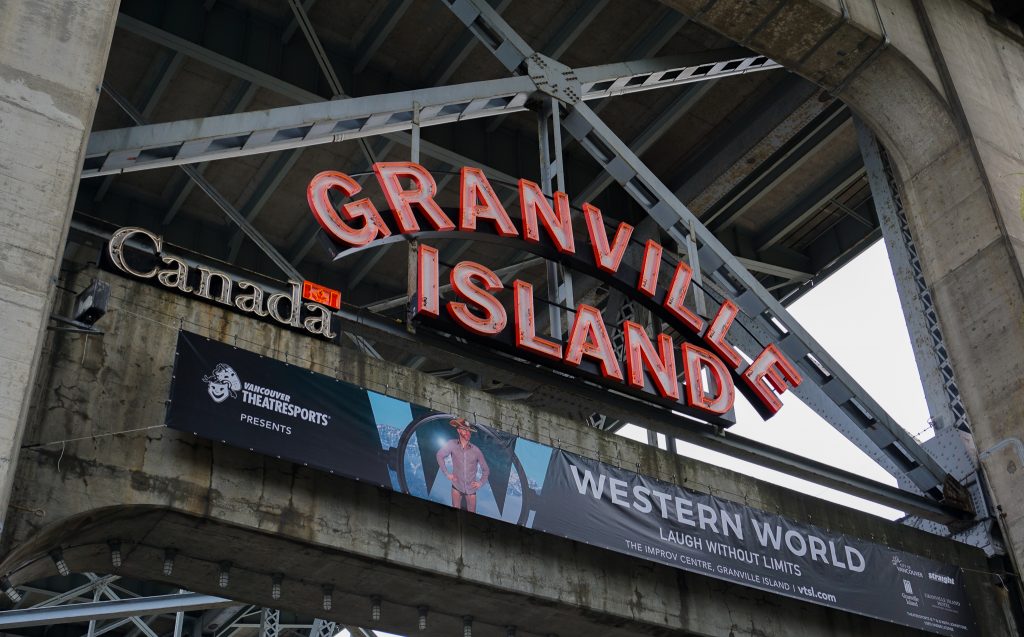 36 Hours to Kill in Vancouver.

I’ve never been a huge fan of cities. They’re big, busy, smelly, smoggy and grimy. Generally speaking. Or maybe, I’m just not a ‘city girl’ (in fact, I know I’m not). However, I’ve got to say, I was actually incredibly impressed with Vancouver. So much so, we wanted to cancel our flight to Bangkok and set up in Vancouver permanently (truly!).

It sits in a whole other ballpark of it’s own. It’s clean, not crazily busy and the downtown area is relatively small. The water is within a 15-minute walk no matter where you are in the city. Everyone is super friendly. Suburbia is a stone’s throw away. There’s a cute café or restaurant hiding around every corner. Nature is all around you. The closest ski hill is only 20 minutes away.

Vancouver honestly has everything you could ever want or need (to live our kind of lives anyway).

Unfortunately we only had 36 hours to explore, so we didn’t waste a minute. Here’s what we did with our short time in Vancouver, detailing what you absolutely should do, and what I wished we’d had more time to see.

We arrived in Vancouver by Greyhound around 5pm Sunday evening, and got straight into a cab to our hotel. Let me say straight up. Cabs are so freaking cheap in Vancouver. If you’re used to the exorbitant cab fares in Australia like me, you’ll understand the shock horror at such a thing as cheap cab fares.

We stayed at Barclay Hotel on Robson Street. Nothing fancy by any means, but it cost us only $130 for the both of us for two nights. And it was less than 2 blocks from the action of downtown Vancouver.

Side note. The only complaints I would have to make about Barclay Hotel was the paper thin walls, and housekeeping knocking on our door at 8.30am to clean our room! We are not late risers, but we had planned to sleep in this morning, to no success (grumpy face).

We still had a few hours of daylight after checking in, so we head on foot downtown to have a wander and find some dinner. Robson Street is dotted with all sorts of retail shops, restaurants and bars.

At the intersection of Robson and Burrard Streets, if you look North you can see the mountains rising high above the Harbor. It is stunning. So stunning I was too busy gaping to take a photo (travel blogging 101, Dani c’mon!).

After wandering around for a while, window-shopping and people watching, we came across a Thai restaurant called Sala Thai on Burrard Street. It was already super busy but luckily they were able to seat us straight away. I can recommend their Pad-See-Ew. We did wait quite a while for our main, but again, they were busy and assured us it was coming, and when it did finally come it was awesome.

After dinner, we meandered back to our hotel, completely buggered from a long day of travel and crashed out pretty hard.

10 hours later, we are half woken by housekeeping banging on our door. Sure, it was time to get up, but we were not impressed.

It was a miserable day outside, raining and grey. So we decided to head out for brunch at Café Medina (on Richards Street). I’d heard good things about Medina, including that you’ll often wait over an hour on weekends to get a table, which is generally a sign of a great place, right. But we thought, Monday morning, who’d be going for breakfast?

We still waited about 45 minutes. This was in part due to our friends stuffing up our place in the queue by adding 2 more, but boy was it worth it (and luckily our friends are good company).

The coffee was fantastic (I’m a huge coffee snob, so that’s saying something). The service was attentive and friendly. And the food… well let’s just say I’m already having cravings for the La Sante again. 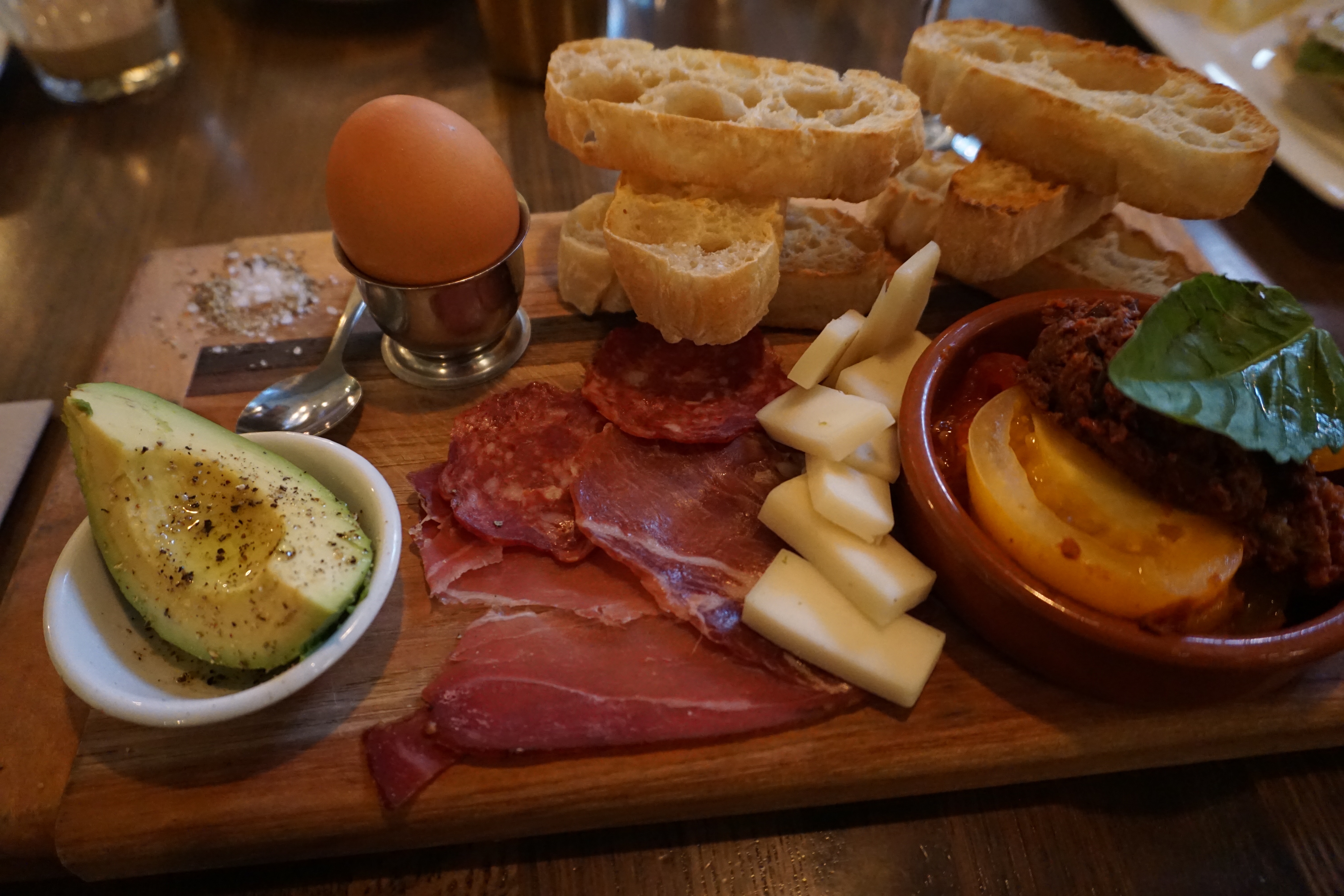 If you’re feeling extra fancy, you should add a glass of the Marquis De La Tour, Brut from France. If you’re a brut fan, it was up there with some of my favourites.

It was still spitting rain outside, so we decided to head to Granville Island where at least we could duck in and out of buildings. We started walking from Medina with the intention of hailing a cab along the way.

Of course there were no cabs driving along the street we were walking down, and when they did, we couldn’t tell whether they were available to be hailed or not (how do you tell in Canada!?).

So we walked. The whole damn way. Luckily the weather cleared up. It really wasn’t that bad (don’t ask my boyfriend though, in his opinion, it was bad!). 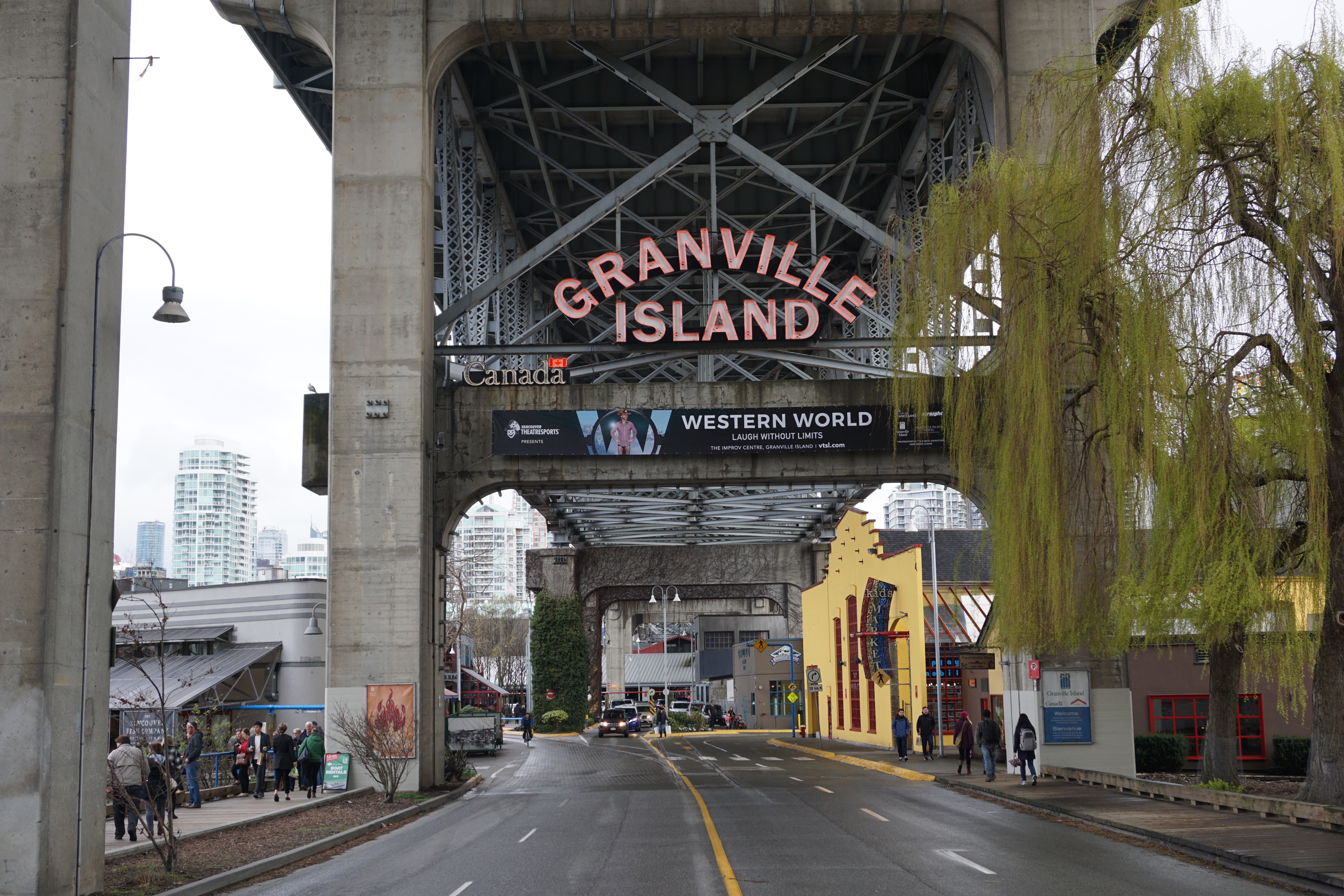 Granville Island is a cool little place for tourists to sample some of the best of Vancouver. With a few different breweries, distilleries and local produce retailers, you can easily spend an afternoon eating and drinking your way around the island.

Granville Island Brewery is an obvious choice for beer tasting. You’re on Granville Island and they’re right at the entrance of the market. They also have some pretty sweet beers on offer.

You can either try their beers by the sleeve (14oz) or pint (20oz), or you can do a tasting paddle of your choices (4 x 5oz). If you’re really feeling it, you can try all 9 beers in 5oz tasters. They’ll give you a tasting map, and place the beers down where they belong, so you can keep track of your progress. They also have a small food menu to keep that stomach lined while you’re doing it. 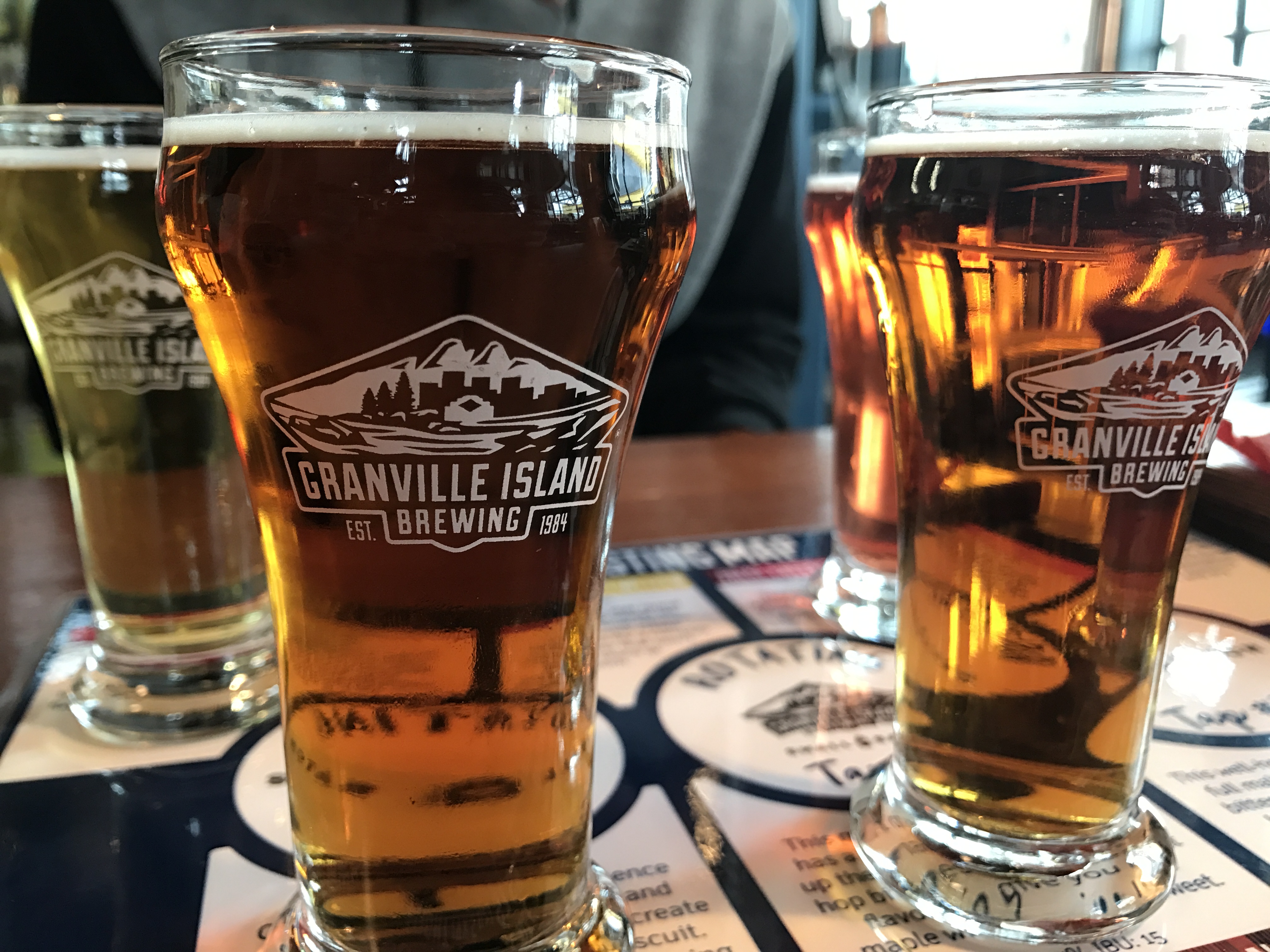 My preferences were: Pale Ale, Raspberry Ale, Island Lager and then Maple Ale.

I guess you can tell whose taste buds wear the pants in this relationship eh, eh.

We caught the aqua bus from the Granville Island, literally to the other side of the river, back to downtown. For $3.50 each, they’ll whisk you 60 seconds across the water. I know my words are dripping with sarcasm, but it really was incredibly convenient.

Next stop Stanley Park. We hired some pushbikes from Spoke Bicycle Rentals on the corner of Georgia and Denham Street. They were incredibly efficient. Got us in and out within 5 minutes. As a bonus, bike rental is only $7 per hour and charged when you return, so you only get charged for the actual time rented (amazing!).

It took us an hour and a half to ride the entire way around Stanley Park on the Seawall. It was really beautiful. One of my favourite things about Vancouver is that you’re in a city, but so close to all kinds of nature.

Don’t miss the totem poles and Siwash Rock. They were my two favourite points along the way, and you’d have to be almost blind to miss them as well. You’ll also want to stop occasionally throughout the ride to take photos of the harbor, mountains and cityscape. 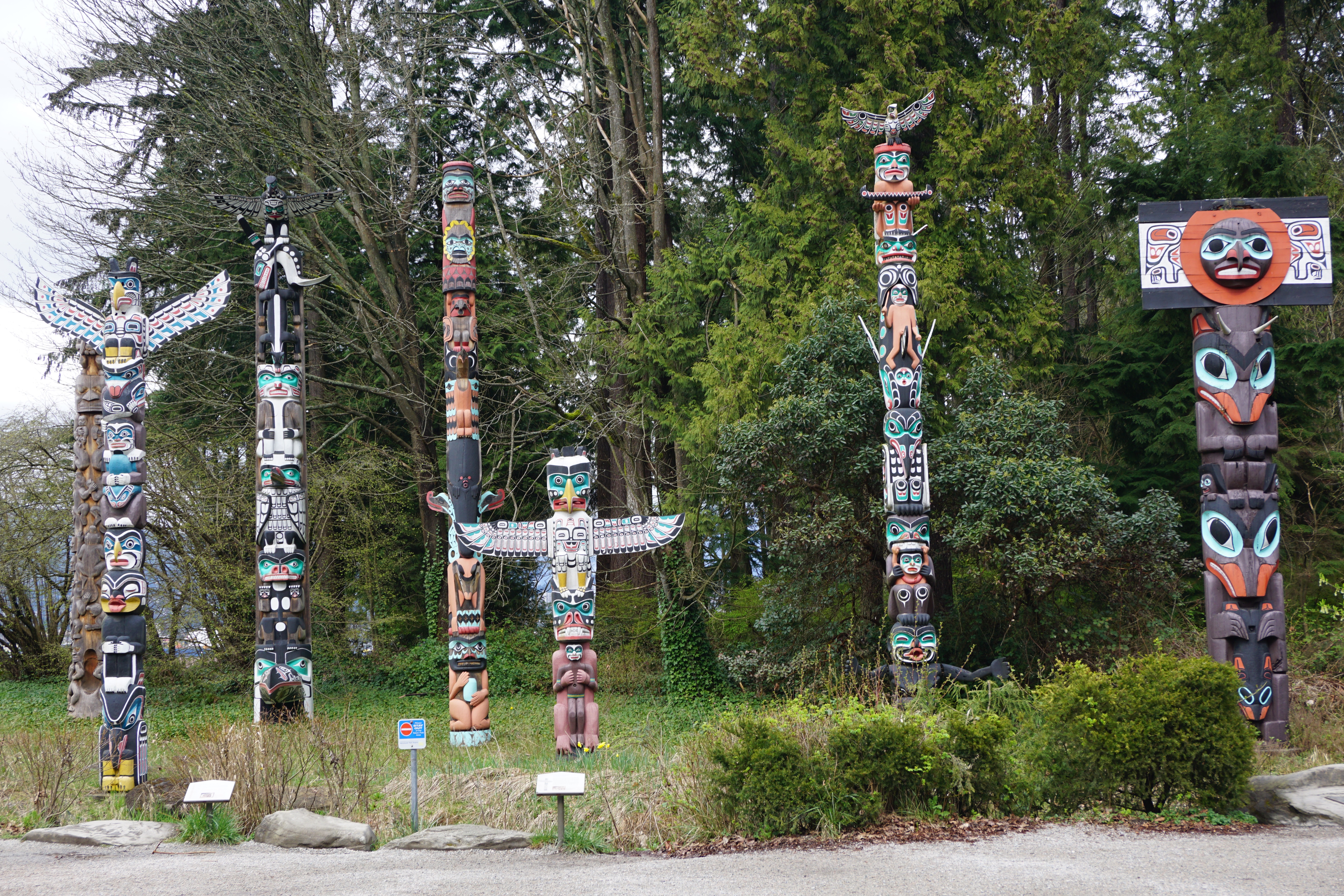 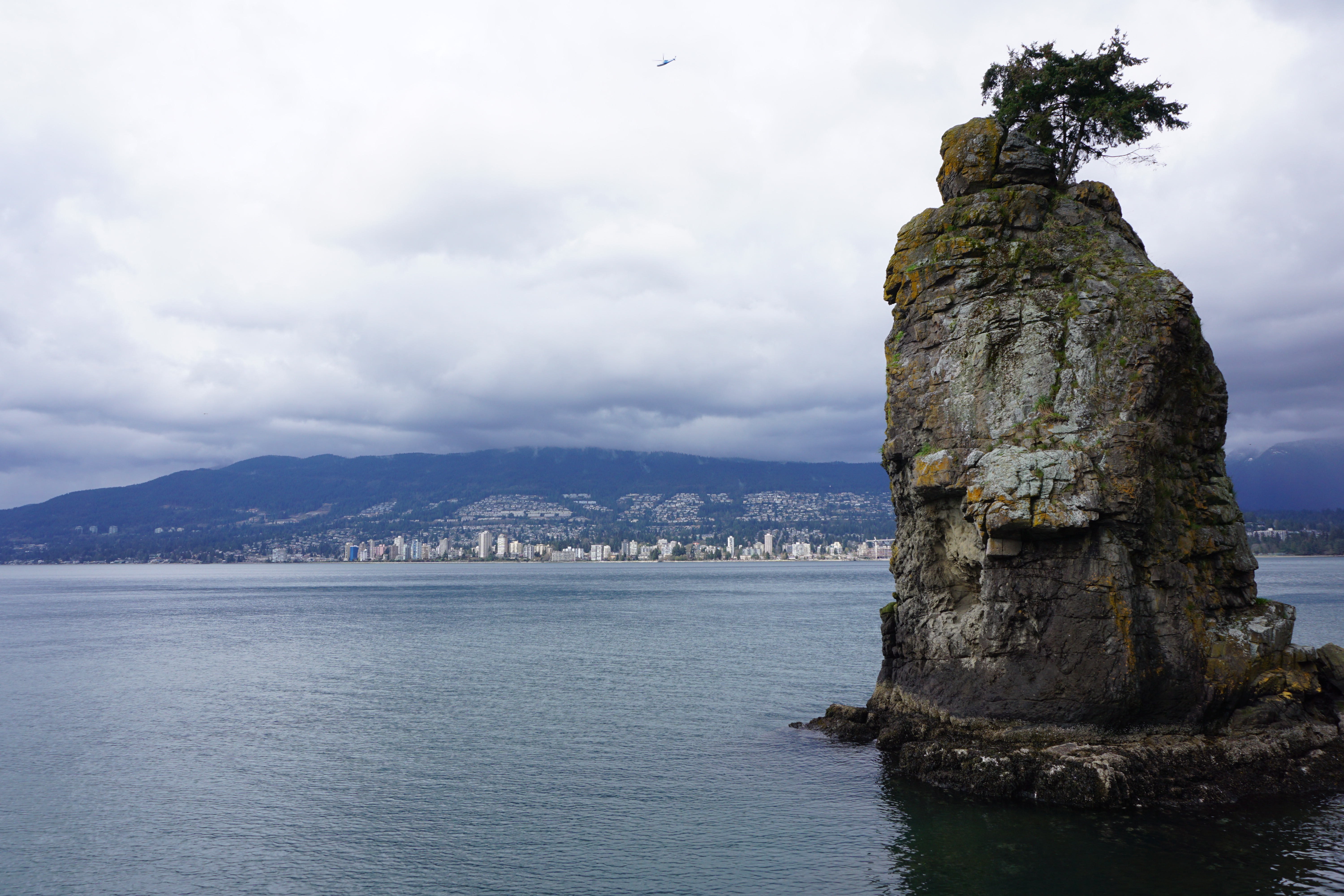 After returning the bikes to Spokes, we headed back in the direction of Robson Street, right in time for Happy Hour. By now, we’ve literally made our way around the majority of Vancouver, either on foot or by bike, and we are starving.

Our friend suggested we go to Earl’s on Robson. Now, I’m not normally a fan of Earl’s, or large chain restaurants that pump out the same food in various locations. So I’ve always avoided Earl’s. However, this one was actually pretty good.

We arrived during Happy Hour (3 – 6pm, $3 basic spirits and house beers), had a few drinks and appies, and eventually ordered some dinner. Their Moscow Mule and Californian Pizza were particularly awesome. 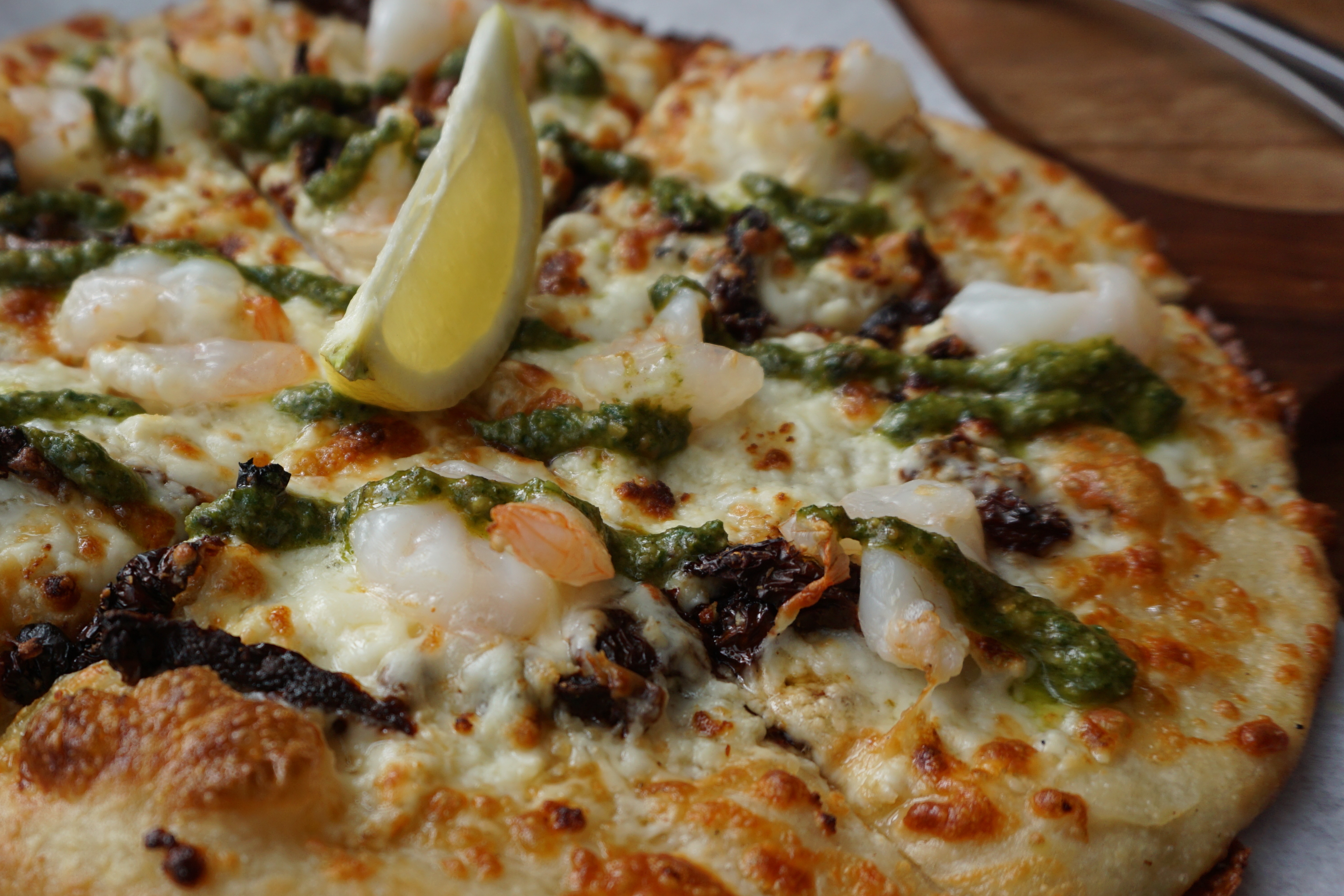 All packed and ready to leave for our flight (insert tantrum having child here)… we ducked out quickly to The Greenhorn Café on Nicola Street, a short 5-minute walk from our hotel. The coffee was delicious, and they have a small menu with quick breakfast items to get you in and out. (If you’re there after 10am, their grilled cheese sandwich is apparently a must-have!).

And with that, we were off. A $40 cab to the airport (including tax and tip, at 10am Tuesday morning – amazing!), we were out of beautiful Vancouver. We honestly left saying if things don’t work out back home, we would come back to live here in an instant.

She left her mark on us, that’s for sure.

Things We Didn’t Get To.

There were a few things on my list of things to do and see in Vancouver, that we understandably didn’t get to in such a short time frame.

Gastown is Vancouver’s Victorian district. The streets are cobbled and the buildings old. There is even an old steam clock right in the middle of town. There are also apparently tons of cool bars and restaurants to check out there.

There are two suspension bridges and valley parks to visit in the vicinity of Vancouver. One is the Capilano Suspension Bridge and Skywalk. From what I’ve read, it’s far more popular, however it does cost $39 per person to enter (holy dooley!).

The Lynn Canyon Suspension Bridge is free to enter, however it takes a little bit longer to get out there via bus. If we had another day, it would’ve been next on our list.

Have Brunch at Chambar

I would’ve loved a few extra hours the morning of our departure to splurge again on brunch. A good friend of mine spent a summer working at Chambar, and has nothing but high accolations  for them.

Dinner is a little more on the pricey side, but their breakfast and lunch menu looks reasonable and delectable, and I would highly recommend making the effort to get over there in your time in Vancouver.

So What are the Key Take-Aways From our Time in Vancouver?

It’s a relaxed city that holds zero judgment. Whether you want to hop around different restaurants and bars all day or head out hiking or site seeing, it’s totally fine.

Don’t feel like you have to walk everywhere like we did, because cabs are insanely cheap (and we both have shin splints today, ouch).

It rains a lot in Vancouver. If you expect it to rain, you will be ecstatic when it’s not (of course it’s sunny the day we leave, classic!).

Give yourself longer than 36 hours and you’ll uncover most of Vancouver’s best-kept secrets (then fill me in, because I need more of Vancouver already!). 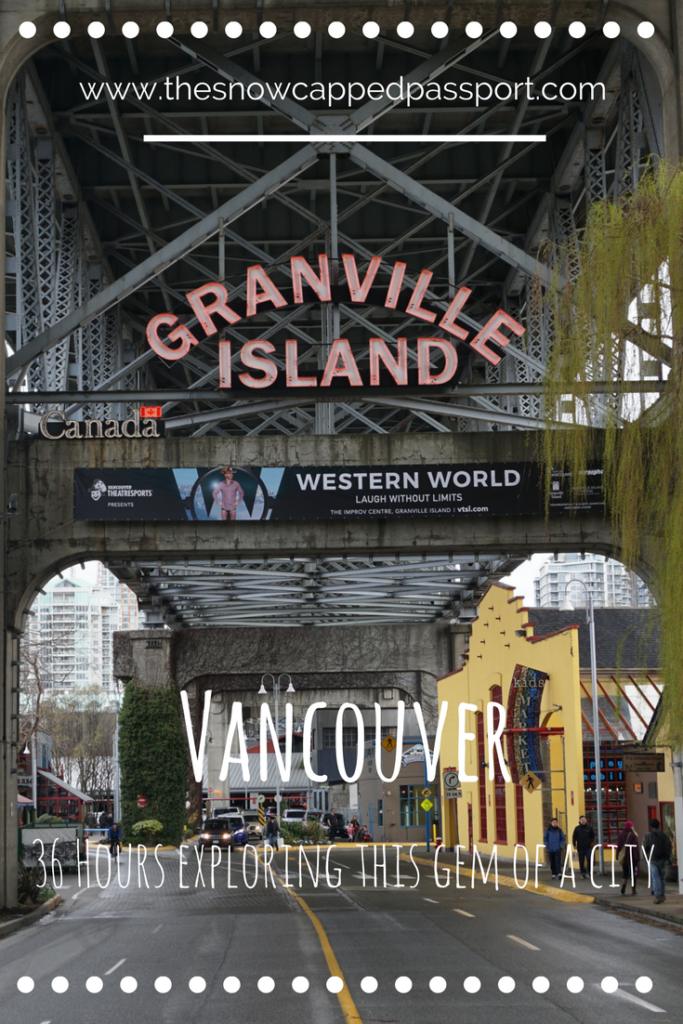