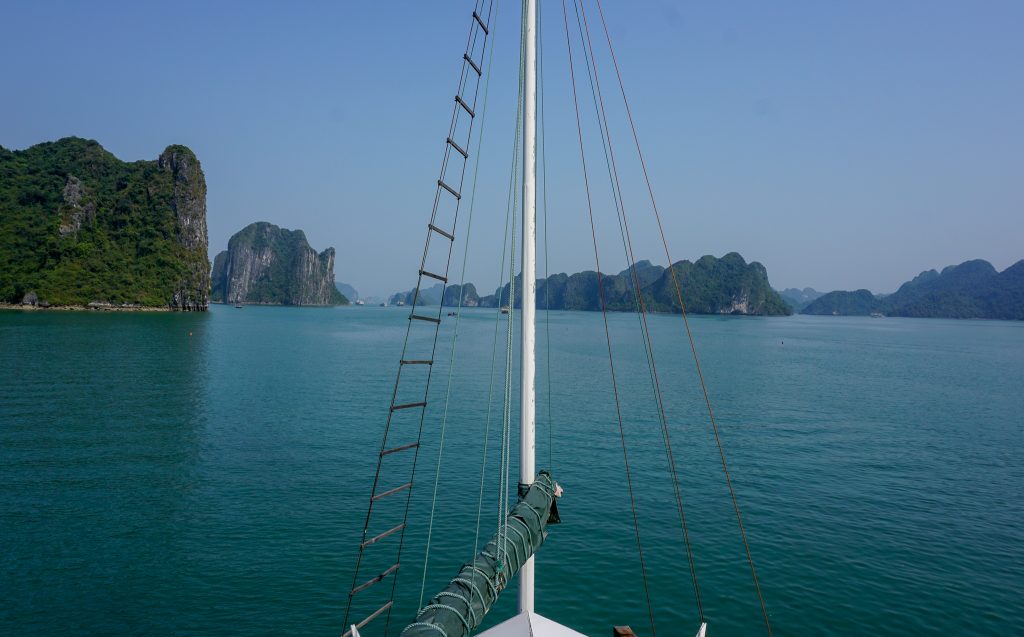 The Perfect Halong Bay Tour for the Mid-Range Backpacker

Researching which tour to take on Halong Bay was an absolute nightmare.

Every time I got comfortable with a company, I would stumble upon more reviews of horrifying proportions. Stories of travel agents tricking them, switched boats at the last minute, boats that are literally falling apart, bed bugs, uncooked or cold food, non-flushing toilets… the list goes on (and on, and on).

The problem is, even the $100 pp overnight tours can be rubbish. It’s expensive, and tour operators know they can charge it because everyone wants to see Halong Bay. I was getting to the point where I was wondering if it was really worth it… and then I discovered Halong Imperial Legends.

They had awesome reviews on Agoda, only one every ten or so reviews was a doozy (which I find completely normal). The price was more than I’d wanted to spend, but the boat looked nice, rooms looked clean and I couldn’t fault the 8.9 score on Agoda. So I bit the bullet and booked them.

And we did not regret it. Yes it was expensive, but we had a lovely, relaxing time and didn’t experience any of the monstrosities of other travellers. Here is a review of our 2 Day/1 Night tour with Halong Imperial Legends.

Transport from Hanoi to Halong Bay (& Back).

The drive from Hanoi to Halong Bay is only about 170km, but it will still take around 4 hours (including a 30 minute refreshment break). Ground travel is nothing but slow in these countries.

We were picked up from our hotel in the Old Quarter of Hanoi at 8.15am. Our guide, Hien, was great! He spoke English relatively well, always kept us in the loop in regards to our itinerary, and threw in a few jokes along the way.

We arrived in Halong Bay around 12.30pm and after a short wait, we were ushered onto our transfer dingy to our boat. We were greeted onto the boat by waving staff. The afternoons itinerary and check in were covered quickly and we were able to dump our bags in our room and head up to the restaurant for lunch. The room was clean, the beds comfy and the bathroom bigger than I expected, so far, so good.

We ate lunch while cruising into the heart of Halong Bay. The food on the boat was absolutely delicious! They served Vietnamese food with lots of delicious fresh seafood, stir-fry’s, spring rolls and yummy noodle salads. 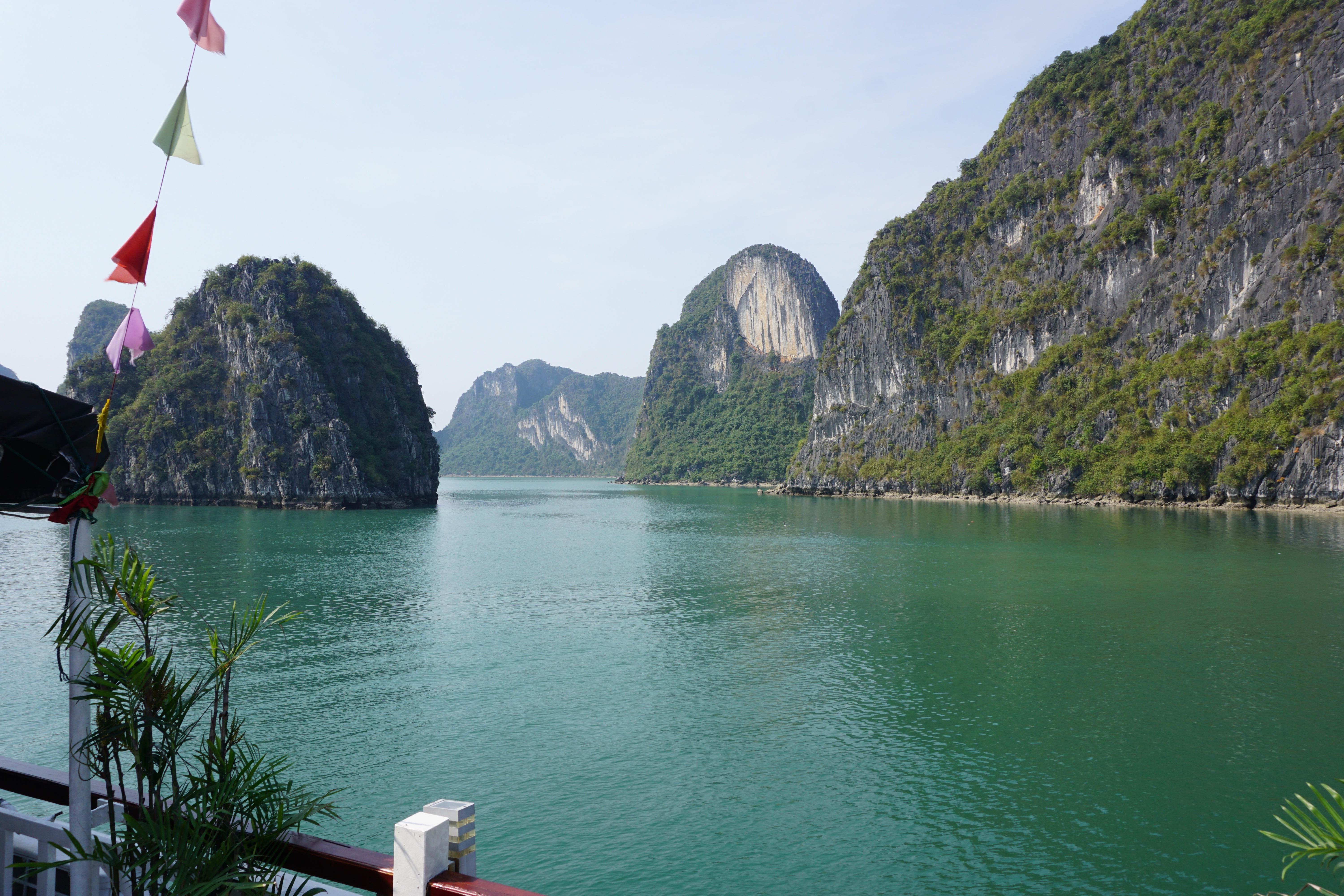 Drinks are not included in the package, and I read a lot of reviews that they were really expensive compared to the main island, but I didn’t find this. We’d also only just arrived in Hanoi the night before, so we couldn’t judge what expensive was. Just make sure you keep track of whatever you’re ordering. Many people had discrepancies in their bills when settling up.

After lunch, we relaxed on the upper deck, admiring the beautiful views as we cruised further into the Bay. Previously, the tour would’ve included kayaking at this time, however for some unknown reason, kayaking in the Bay is now banned (sad face).

Around 3pm, we jumped back onto the dingy and headed to Ti Top Island (a.k.a Titov Island). The Island was named after the legendary astronaut Gherman Titov who accompanied President Ho Chi Minh to visit the Island in 1962.

You can climb to the top of the island (via hundreds of stair-master inspired stairs) to get an aerial view of the Bay. It was pretty phenomenal actually. The climb was not that bad, despite the heat, and jeers of people walking back down. But I guess we are generally fit (-ish) people. 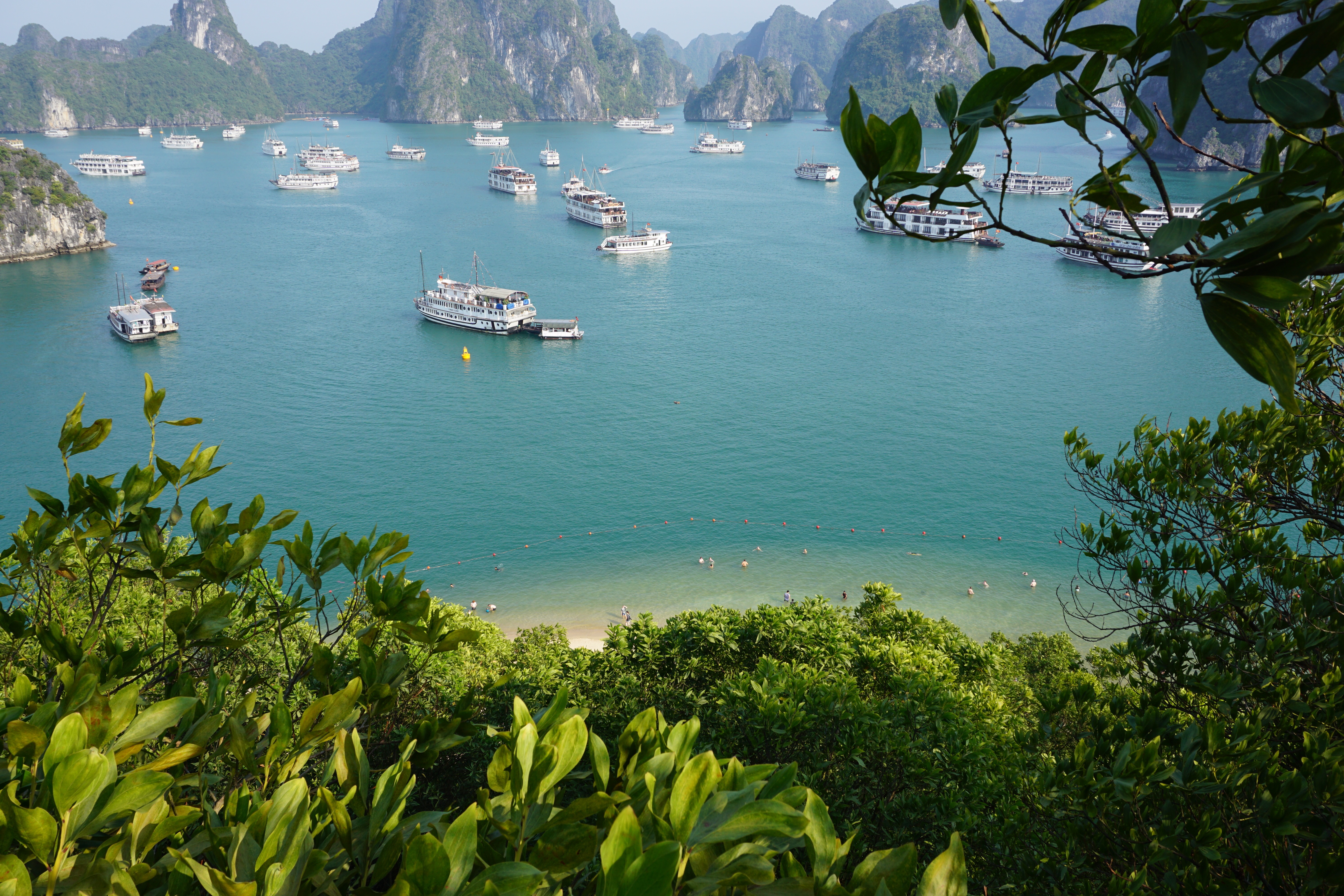 The halfway rest point (above), the stair climb up (below)

For the rest of our time on Ti Top Island, we lay on the beach (and instantly the sun went behind the clouds – classic). We took turns going for a quick swim. The water was way colder than I expected, and also way dirtier. I was actually really disappointed with how much rubbish there was floating around. Not just on the waters edge of Ti Top Island, but throughout the whole bay.

As we were climbing back onto the boat, the crew encouraged us to take showers (while they turned the hot water on), and then to come to the upper deck for happy hour cocktails. The catch is, it’s actually buy 2, get 1 free… the cheeky little buggers. Most of the people on the tour were couples, so obviously you had to drink more.

We just stuck to the beer (the Halong beer is actually really nice!), and enjoyed the cooling of the weather as the boat drifted along. It was the first time since we arrived in Asia that we had really slowed down for a minute. It was lovely! 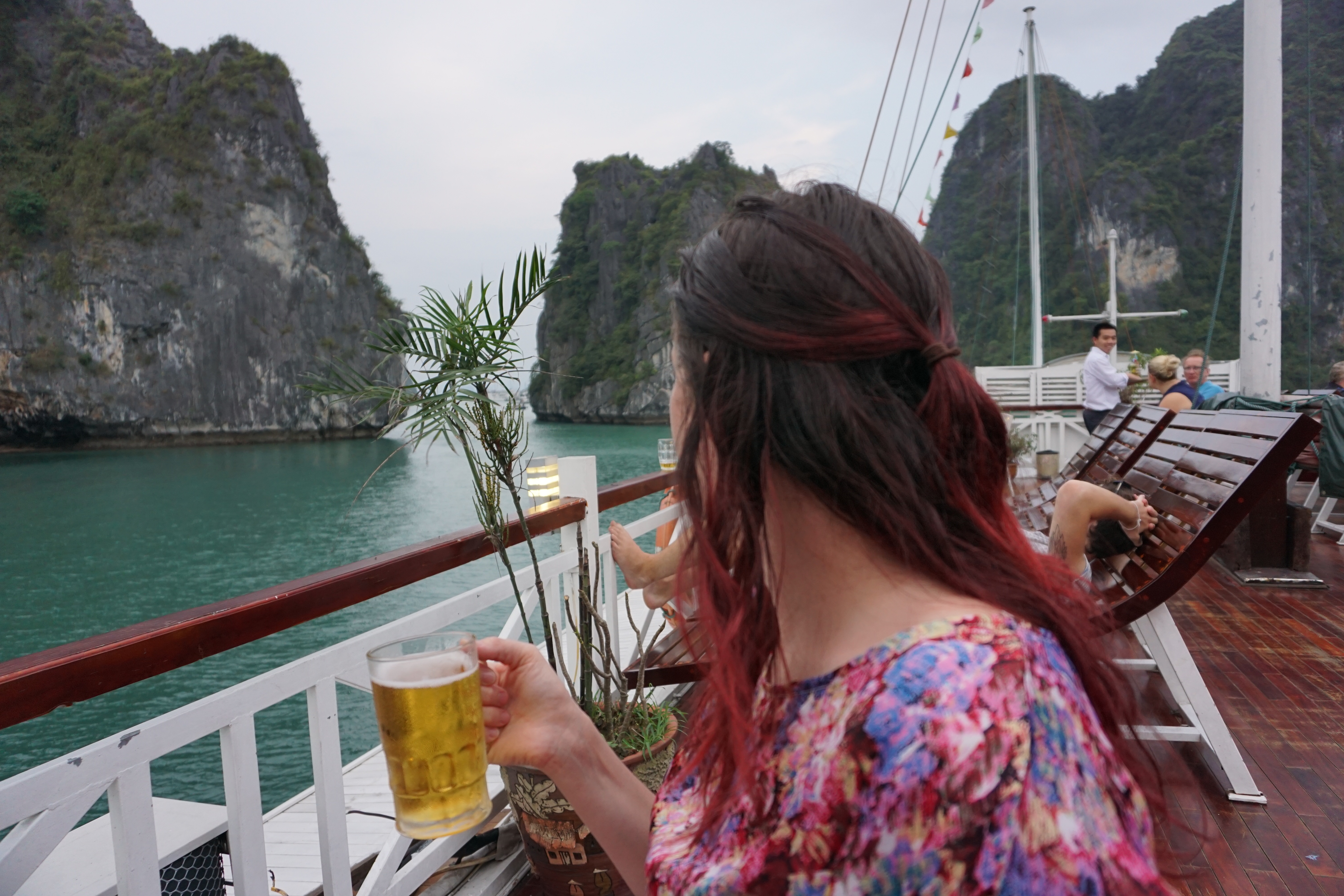 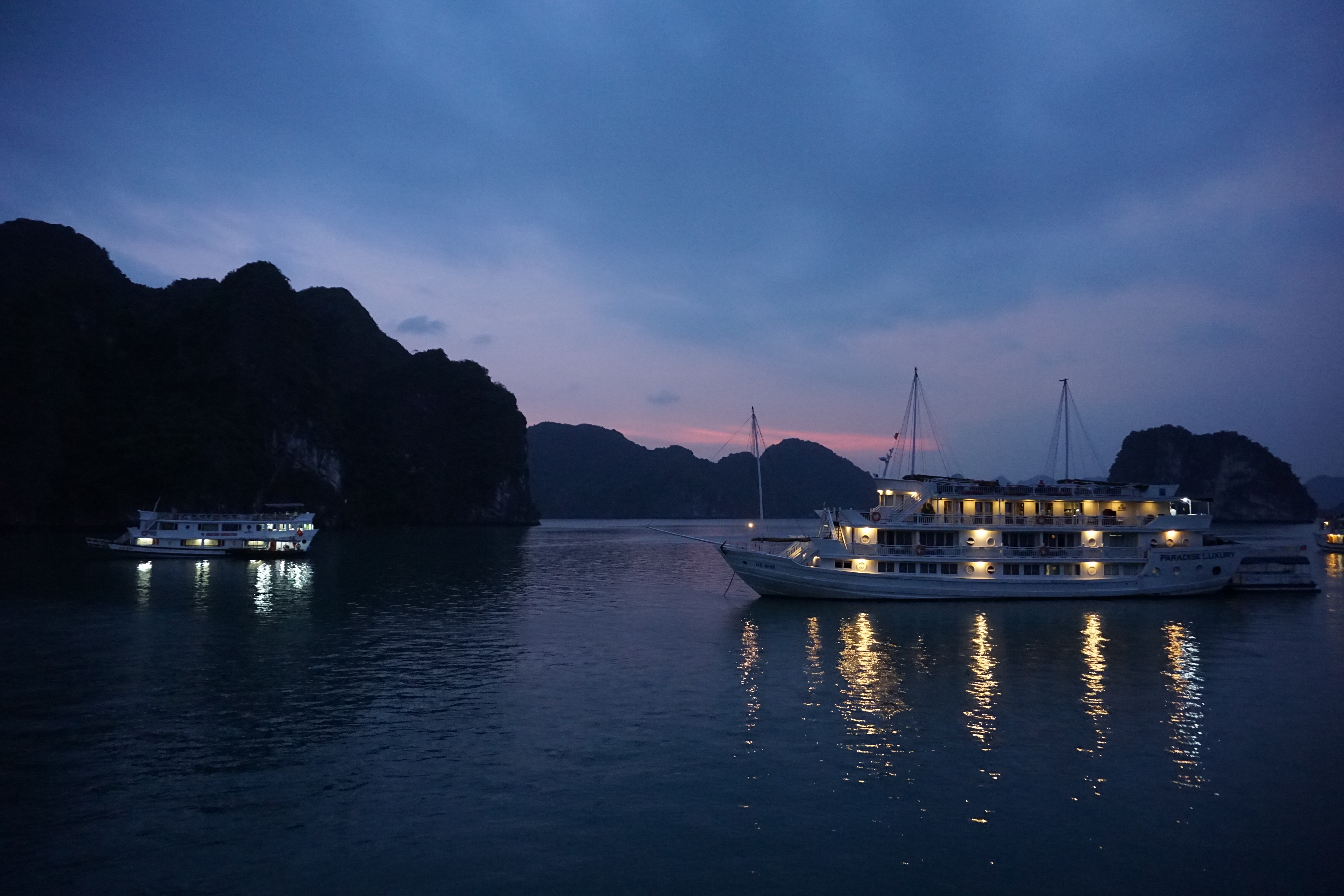 Dinner was a similar affair to lunch, and delicious again. Elvis, the head bartender, tried his hand at some magic tricks, failed and we won a true happy hour (buy 1, get 1 free – that’s more like it!). Then the karaoke started (eek). They also set up squid fishing for you off the front of the boat, not that anyone caught anything.

The next morning we were up for breakfast at 7am, and off to visit the Surprise (or Sung Sot) Cave. Surprise Cave supposedly got its name from exclamations of tourists when they entered the cave of, ‘wow’, ‘amazing’, and ‘unbelievable’. As you’re walking into the cave, it feels like it’s going to be very small and a cramped walk throughout the caves. But after a few steps, it opens right up and is actually huge inside!

The cave has three different segments, each one grander than the previous. It was really cool to see. One hour was definitely enough to tour Surprise Cave as after a while, it all seems to look the same (sacrilege to say, I know… short attention span over here). 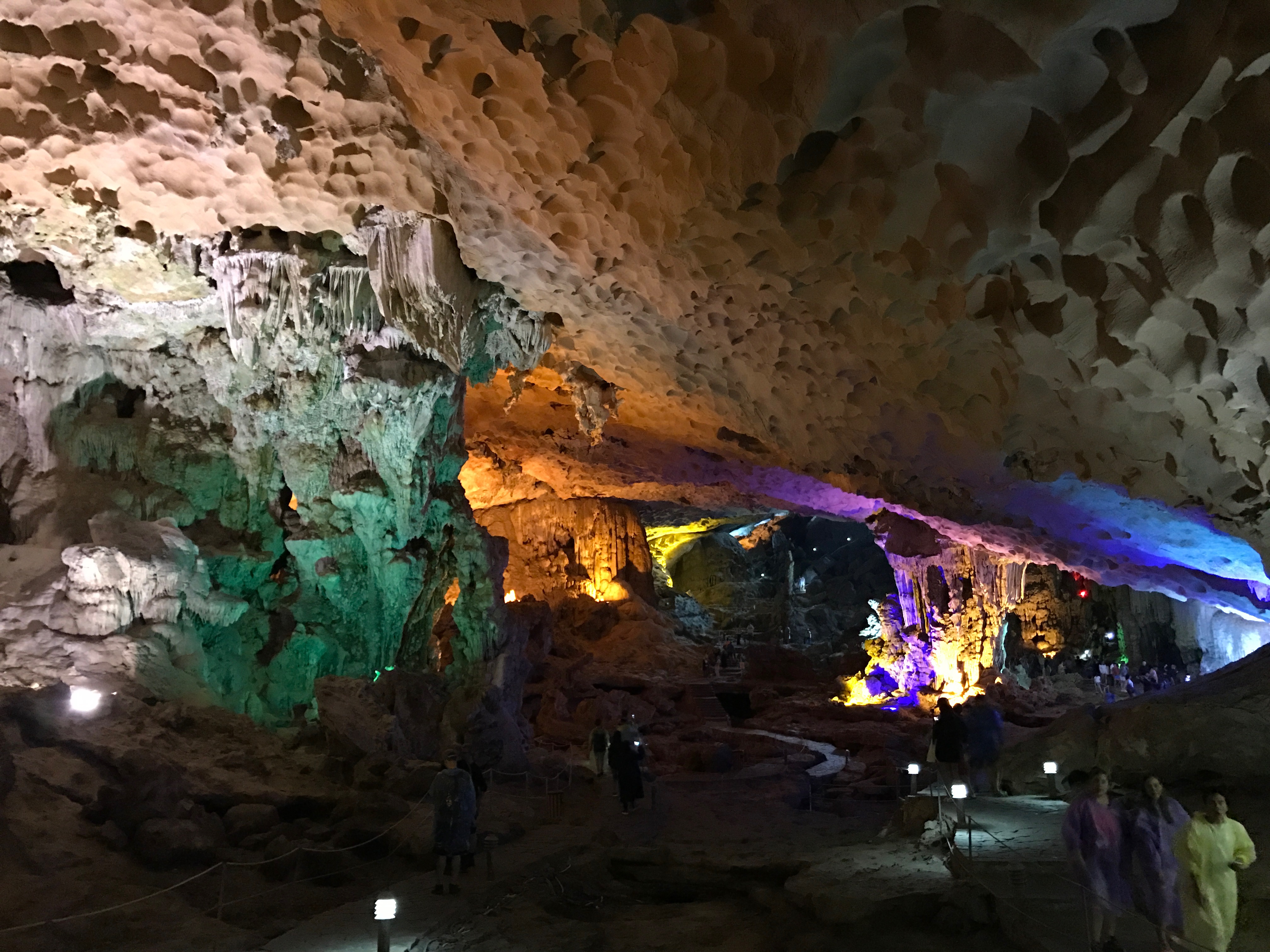 Good luck trying to get pictures without other people. It’s crazy busy in there.

Time to Make Your Own Spring Rolls. 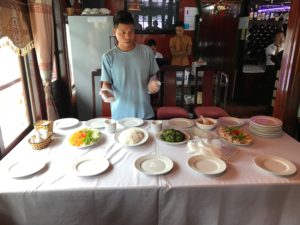 Back on the boat, it was sadly time to head back towards the mainland. To kill some time before lunch, Hien gave us a cooking class in how to make fresh spring rolls (a huge thing in Vietnam). It really was very simple, but definitely fun to make your own. Our ingredients were pork, egg, carrot and cucumber, rice noodle and salad. We loved them so much, we made two each!

All too quickly, we were served lunch, had settled our bills and were back on dry land. I was sad to say goodbye to Halong Bay, but we were so lucky we had great weather on day 1 and an awesome tour to boot.

The tour cost us $150 AUD per person for 2 Days/1 Night cruise. I booked it through Agoda, but you can also book directly through them, the rates are the same. This was by far one of the more expensive segments of our trip, however I can honestly say it was so worth it!

A few people on the boat booked through travel agents in Vietnam and were not shown pictures of the boat or even sure of what to expect. Maybe this is your style, however I much preferred having done my research, and booked in advance.

If you have the time, and the extra money I can recommend doing the extra night to stay in the Cat Ba Island Bungalows. Everyone who got back on our boat to head back to the mainland said it was amazing! I was super jealous.

Have you toured Halong Bay? What was your experience with the hundreds of tour companies on offer? 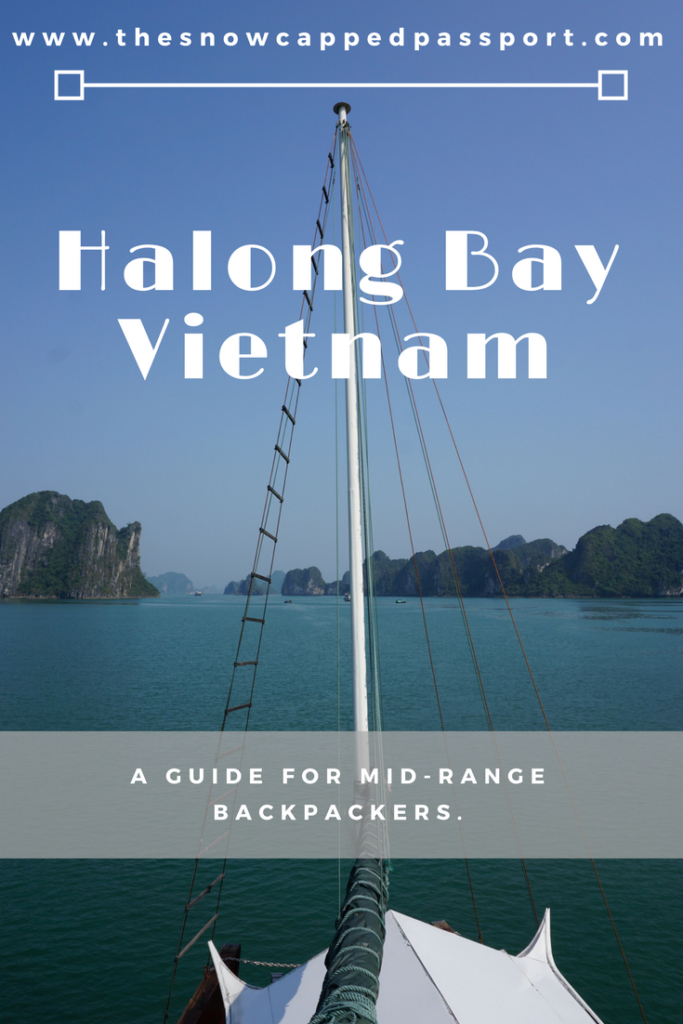