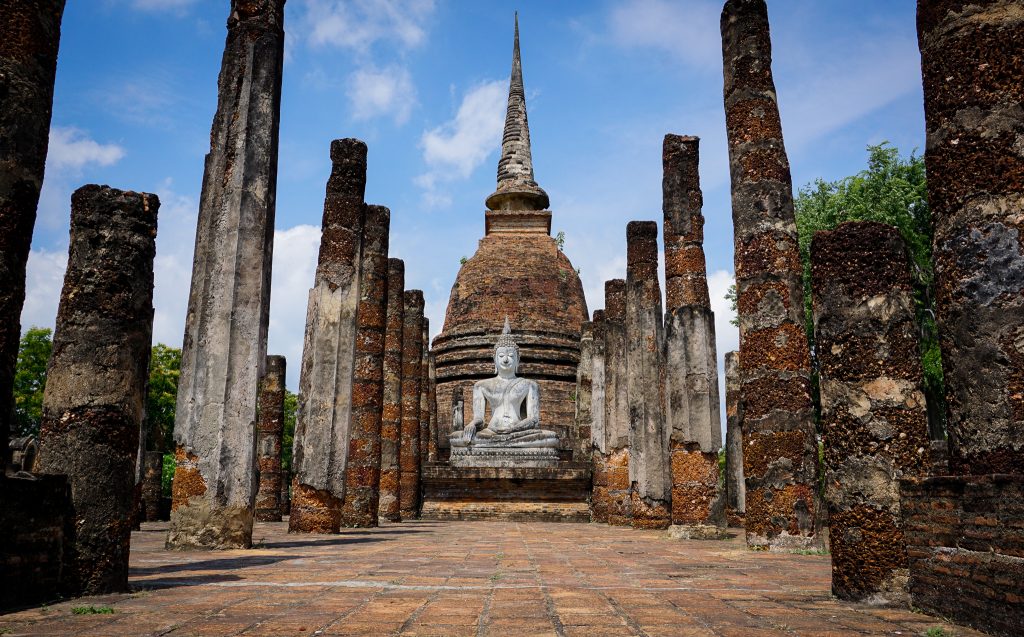 I haven’t been to Angkor Wat (yet), but Sukhothai was incredibly impressive.

Lying amidst the Old Sukhothai Town, the park spans over 70 square kilometres and is home to over 190 historical ruins. Basically, it’s a jaw dropper (if I haven’t made that clear enough already!).

Sukhothai is accessible by bus from Bangkok (6-8 hours), or Chiang Mai (5-6 hours). Travel time is hugely dependent on your driver, and how fast he/she wants to drive, how many detours the driver is willing to take to drop off local passengers, and the traffic (a given).

Our bus trip took 8 hours, with poorly functioning A/C and one very small refreshment break. It was hell on Earth for a little while there (luckily the reward was so great).

The bus companies who operate routes to Sukothai are Sukhothai Tours and Win Tours. Depending on day, time etc the bus should cost you anywhere between 200 to 400 baht. We paid about 350 baht each from Bangkok.

We stayed at Ban Thai Guesthouse. It was amazing, and I cannot recommend them more highly! 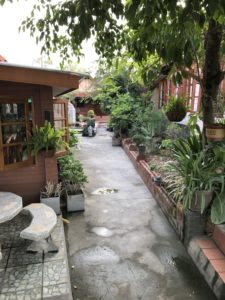 They have cute little individual bungalows with air conditioning and a fan, that make you feel like you have the whole place to yourself. Surrounding the bungalows is a well-kept garden and a Koi fishpond. There’s also a nice indoor open-aired sitting area, where the reception is, if you want to chill out somewhere other than your room.

It is tucked away, just around the corner from the main street. Meaning the location is excellent, but you feel like you’re far enough away to get some peace and quiet. The bus stop to the Old City is about a 3-minute walk, the night markets a 5-minute walk and there are plenty of restaurants within 1 or 2 minutes.

Getting to & Around Sukhothai Historical Park. 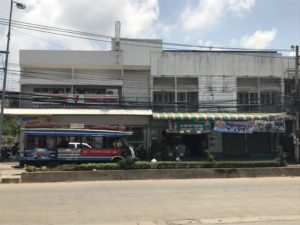 The Historical Park actually lies in the Old City. It’s about 12km, or 20 minutes on a blue songthaew (pictured) from the New City. The songthaew will cost you 30 baht each way, or you can take a tuk-tuk for a couple of hundred baht.

You can stay in the Old City, however there is not much to do once you’re done exploring the park. We stayed in the New City to have plenty of restaurant options, and there’s also a night market every night to peruse.

There are many ways you can get yourself around the park.

Push bikes cost only 30 baht for the whole day! The bicycle rental shop is conveniently located just outside the gates of the main entrance. Don’t worry. They won’t let you miss them. They’ll be calling out and waving you down the minute you step foot off the songthaew.

The bikes are a little on the older side, however they get the job done nicely. It was really nice riding around in between sites. Not only does it get you there nice and quick; it saves your walking legs and you get some breezy air on the way. 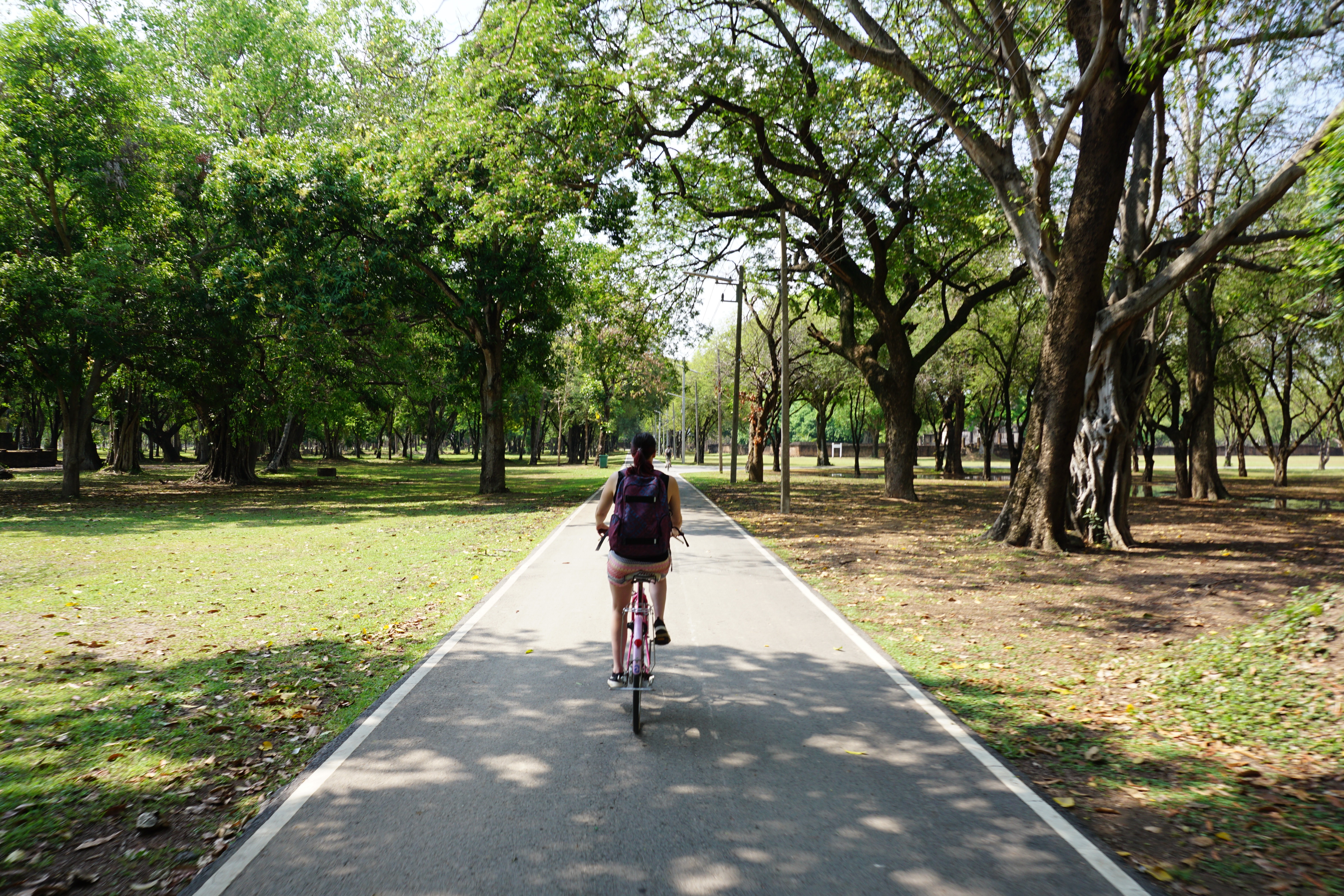 Which Parts to Explore?

If you check out this map I borrowed from Goggle, you can see that Sukhothai has five sections. The main or central section is the most popular and the one that lies within the moat or walls.

Each section costs 100 baht to enter (plus another 10 baht if you’re on a bike). We only had one day in Sukhothai. I think you could easily do two or three sections in one day, if you pushed it. However, it was 2 million degrees out there, and we decided the main section was enough for us.

I guess it depends on your budget, and whether you think 110 baht per section entrance fee is worth it or not (or expensive for your budget). Or if it’s the hottest part of the year and you don’t have it in you to carry on. But given another day, I probably would’ve liked to have seen one more section, just because it was so fascinating!

My favourite stops within the central section were:

Translates to ‘temple of the great relic’, and you’ll come across many temples in Thailand called Wat Mahathat which house Buddha statues. It is the first site you’ll come across, and in my opinion, the most impressive. Prepared to be blown away. 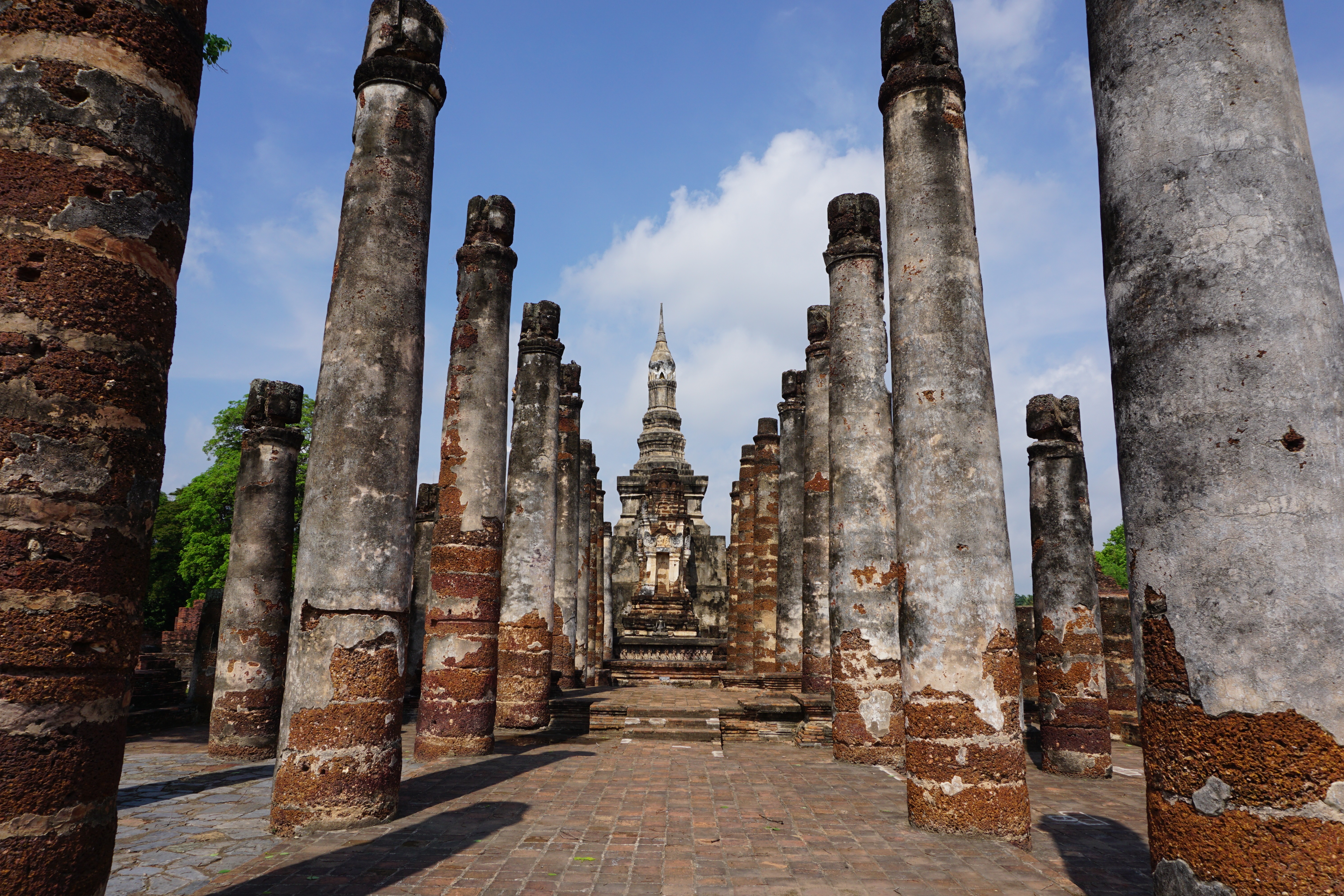 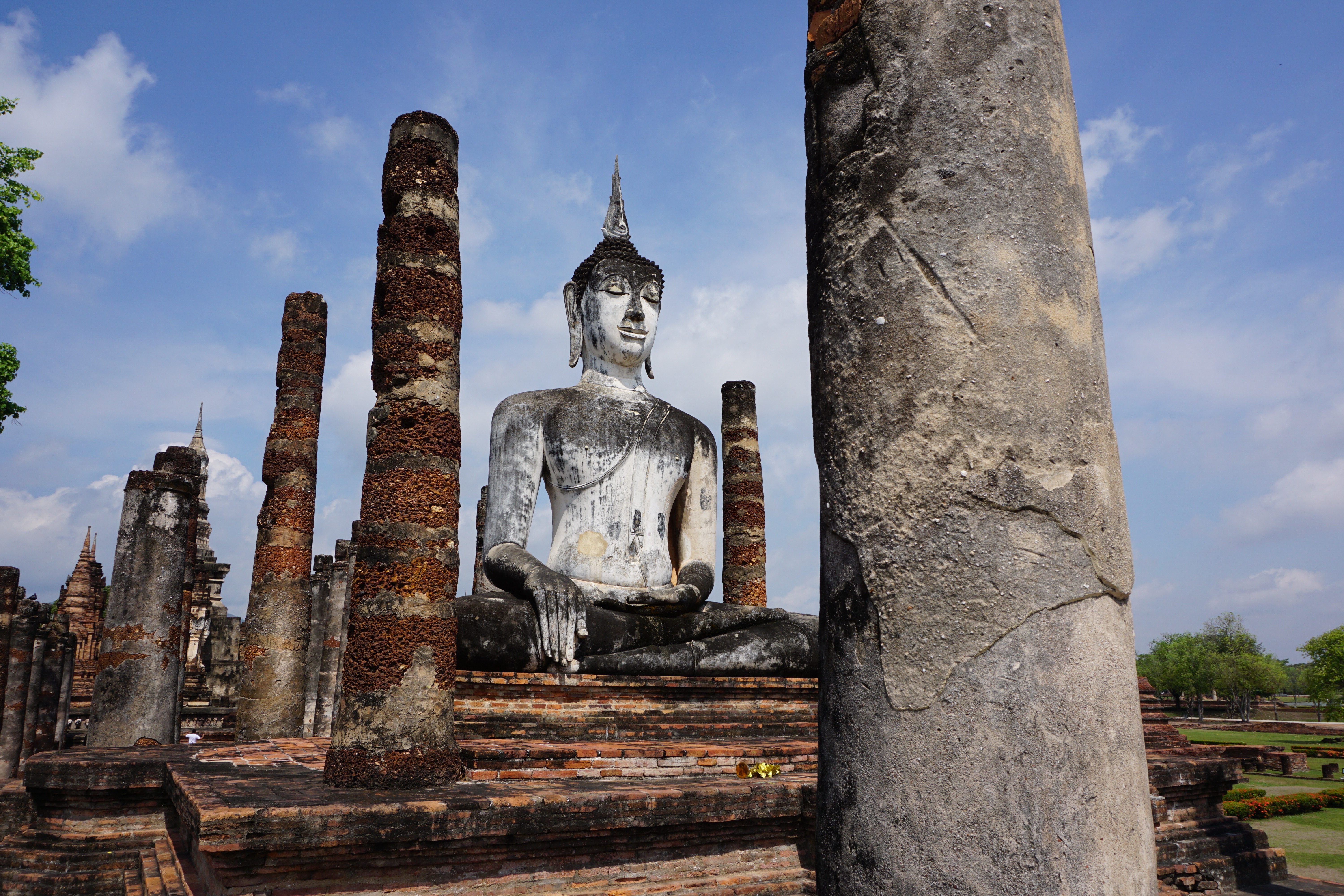 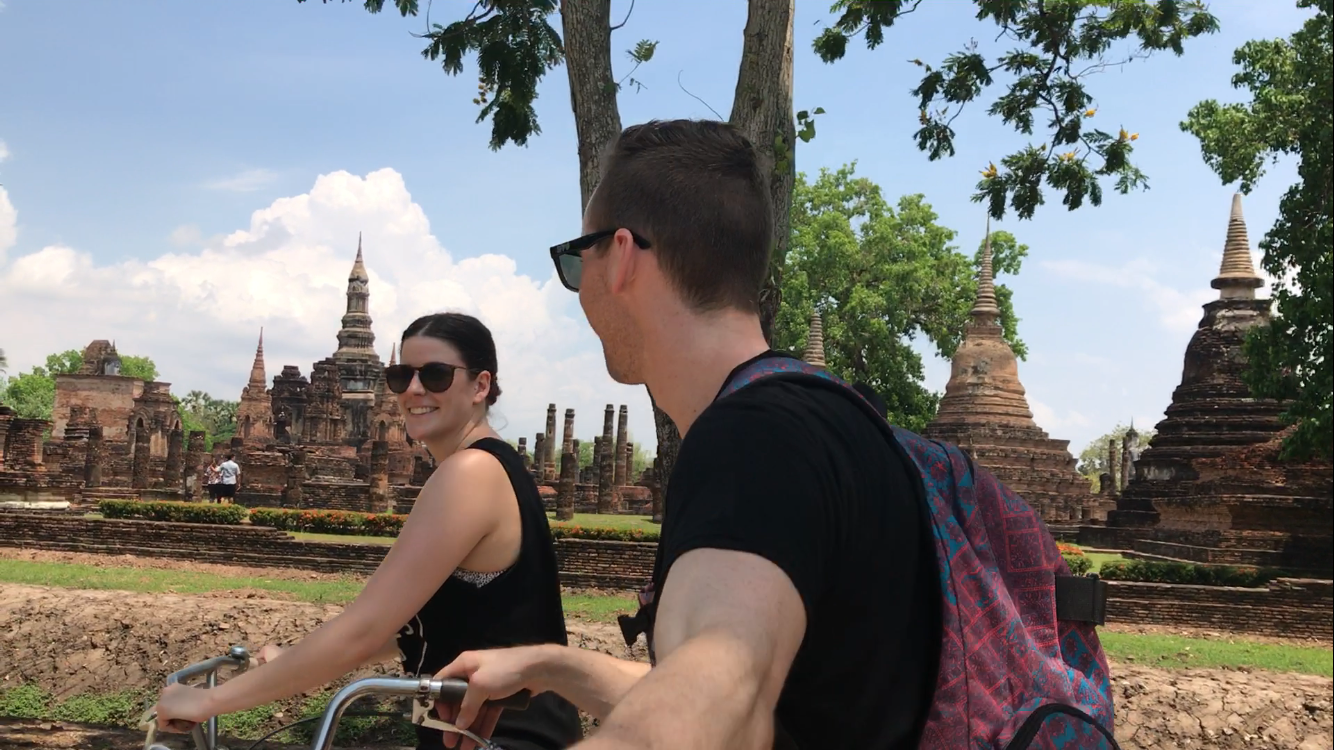 One of the oldest temples in Sukhothai, Wat Si Sawai is believed to have been founded late in the 12th century or early 13th century, before the founding of the Sukhothai Kingdom. The fact that it is still in such good shape amazes me. I found this temple very intriguing and peaceful. One where you could easily chill out all day. 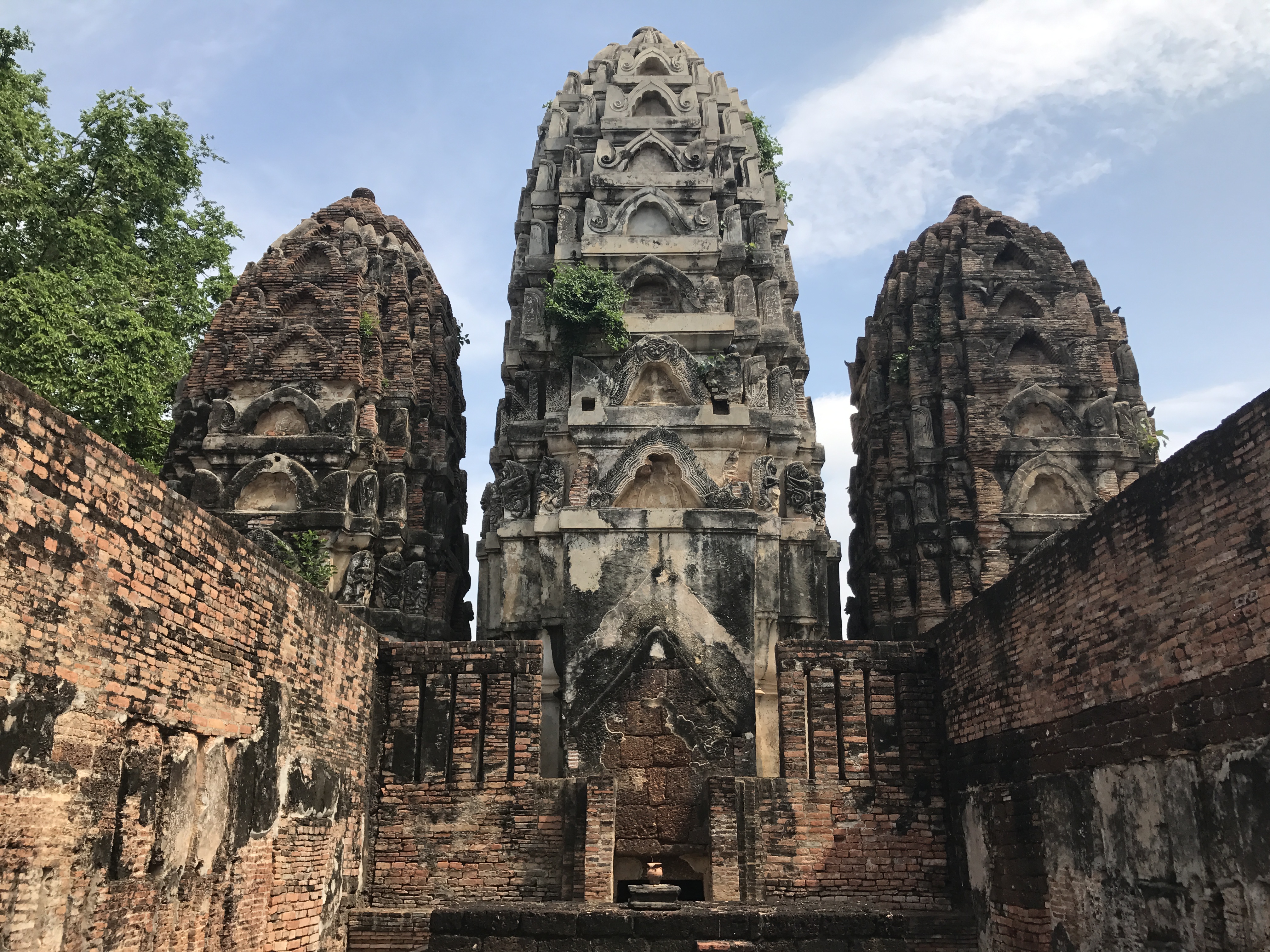 Lying in the heart of the main section, surrounded by ponds and greenery, Wat Sa Si dates back to the 14th Century. The main part of the structure is the assembly hall, with a beautiful Sitting Buddha in front of the main Stupa. 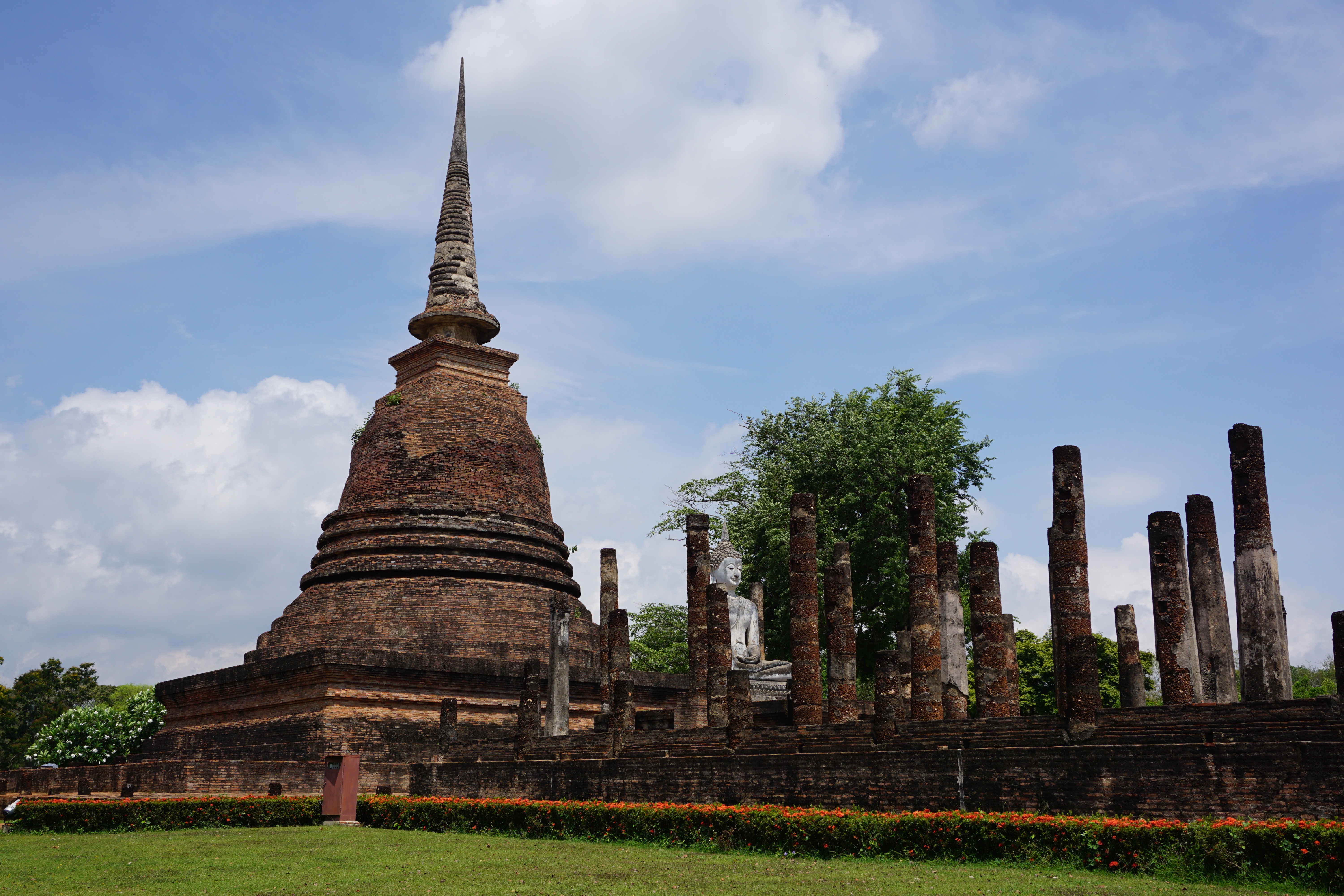 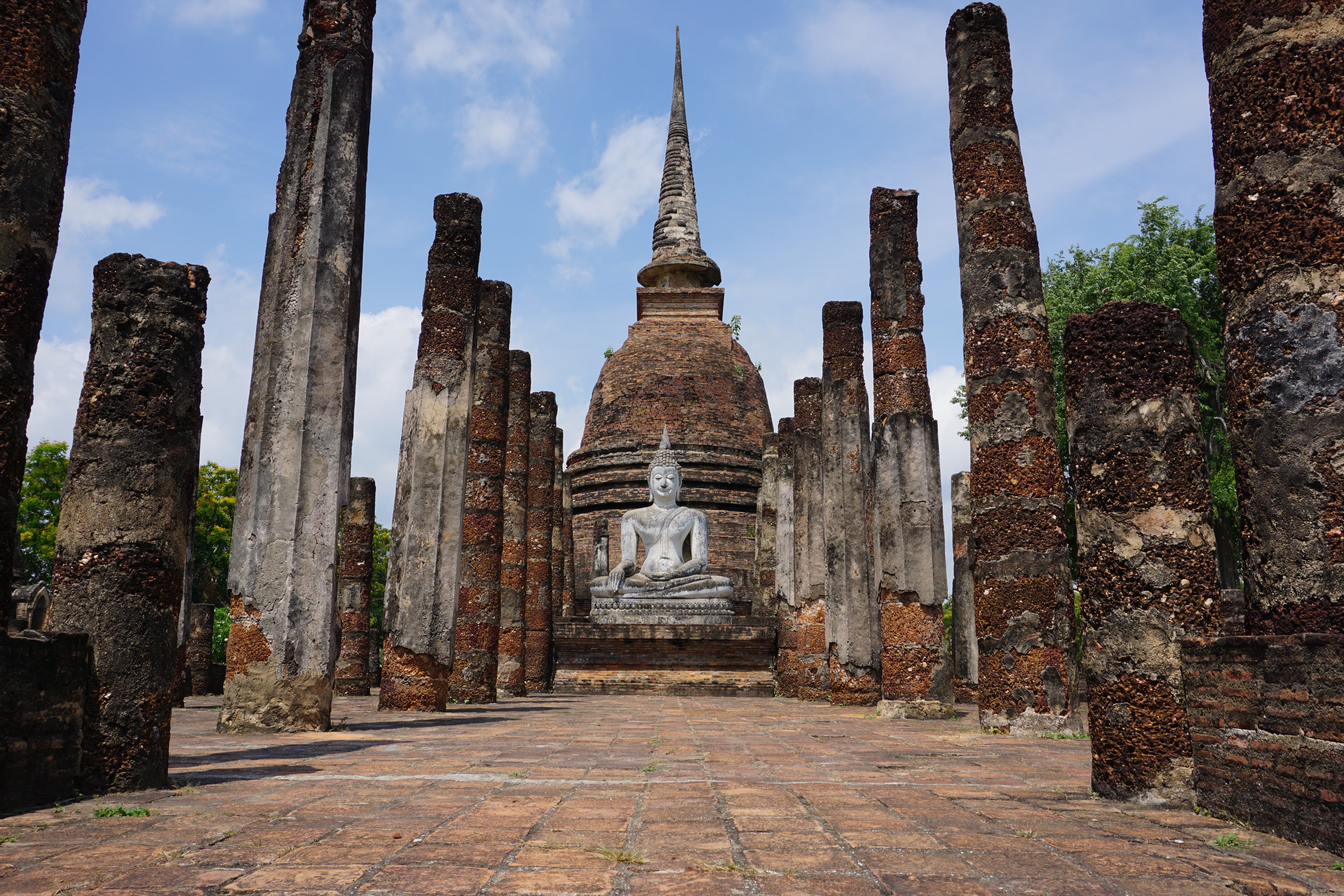 The Thai’s love their kings. Whatever you do (I’m sure you wouldn’t anyway), don’t speak ill of the King. It is a slap in the face to the Thai people.

King Ramkhamhaeng ruled Sukhothai between 1279 and 1298, and while he was not the founder of Sukhothai, he is regarded as its greatest ruler. The monument was only erected in 1971, so it is not particularly historic, but the Thai’s love for their kings is. 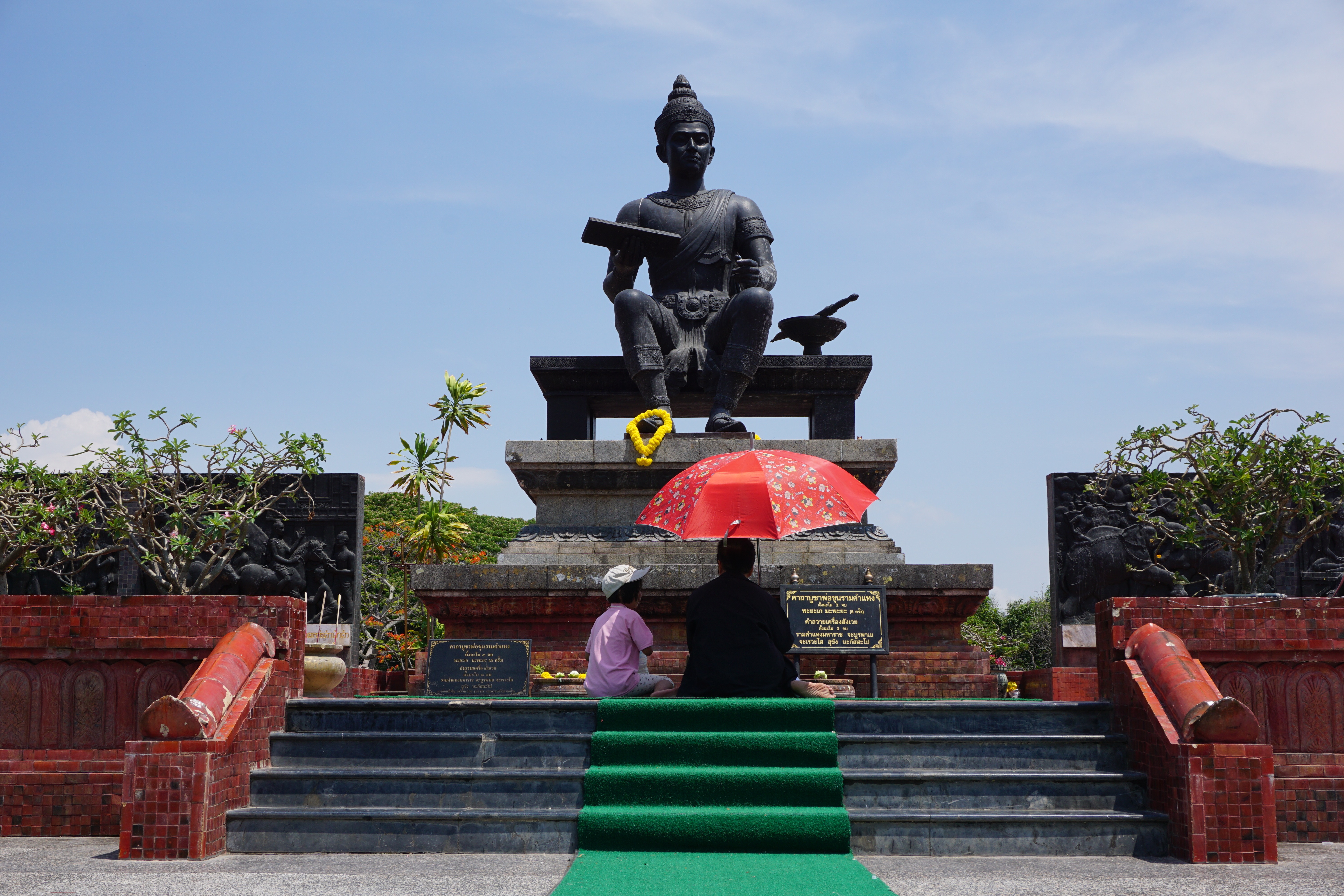 Other Things To Do In Sukhothai.

There is not a whole lot in Sukhothai other than the historical park. So spend the day exploring the park, then sit back, relax and enjoy the rural Thai lifestyle. 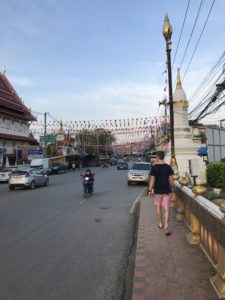 There are some great restaurants along the main strip. My favourite was Pai Restaurant. They served an amazing Penang Curry! Poo Restaurant is also very popular with the Westerners, serving both Thai and Western foods, however I didn’t enjoy my Thai fried noddles as much as other places.

When you arrive at New Sukhothai Bus Station, if you’re hungry, you should head across the road from the Terminal entrance. There are a few street food stalls there. The one of the very end (looking right from the bus station) is run by an old couple who made the most phenomenal Pad Thai we’ve had in Thailand, for 35 baht! Crazy cheap.

There is also a Night Bazaar, (as with every Thai town) that you can wander. Clothing is noticeably cheaper here than Bangkok. If you’re feeling game, you
can even try some Thai delicacies like fried cricket, grasshopper or worm (vom!).

In my opinion, Sukhothai is a must do. Especially if you’re travelling from Bangkok to Chiang Mai or Chiang Rai. It makes for a nice pit stop to break up the journey. You could even spend only one night here, and catch the evening bus after exploring all day. Regardless, it is definitely worth the stop. 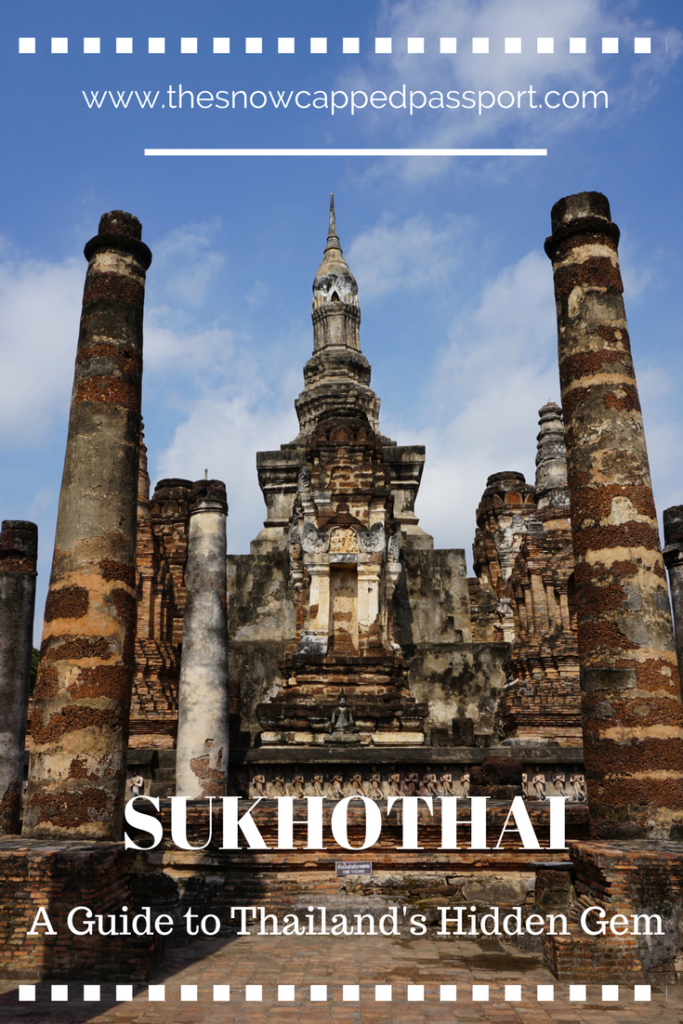