There are many things to consider when planning on working a season in any country, and the same is true for Japan. Many people think that signing up for a working holiday in Japan is harder than other countries because it’s a non-English speaking destination. Well, I have good news for you. That is simply not true!

Japan is easily one of my favourite countries in the world 😍. I’ve worked one season in Hakuba, and spent weeks at a time exploring Hokkaido on holidays. I visited Japan four years in a row, before I decided it was time to explore Canada. I’m telling you, the Japan bug bites hard.

You see, there is not much to not like about Japan. The cities, the countryside, and all of the temples are simply stunning. Not to mention the incredible people, their culture, and the delicious food they produce. And of course, the powder is among some of the best in the world.

Contrary to what people may think, it is super easy to arrange a working holiday in Japan – especially over the winter season. The bigger resorts like Hakuba and Niseko, need international workers to help the resorts run!

So, in this post I’m going to give you the rundown of what you need to do to get your working holiday in Japan off the ground, and what you can expect from this amazing country. 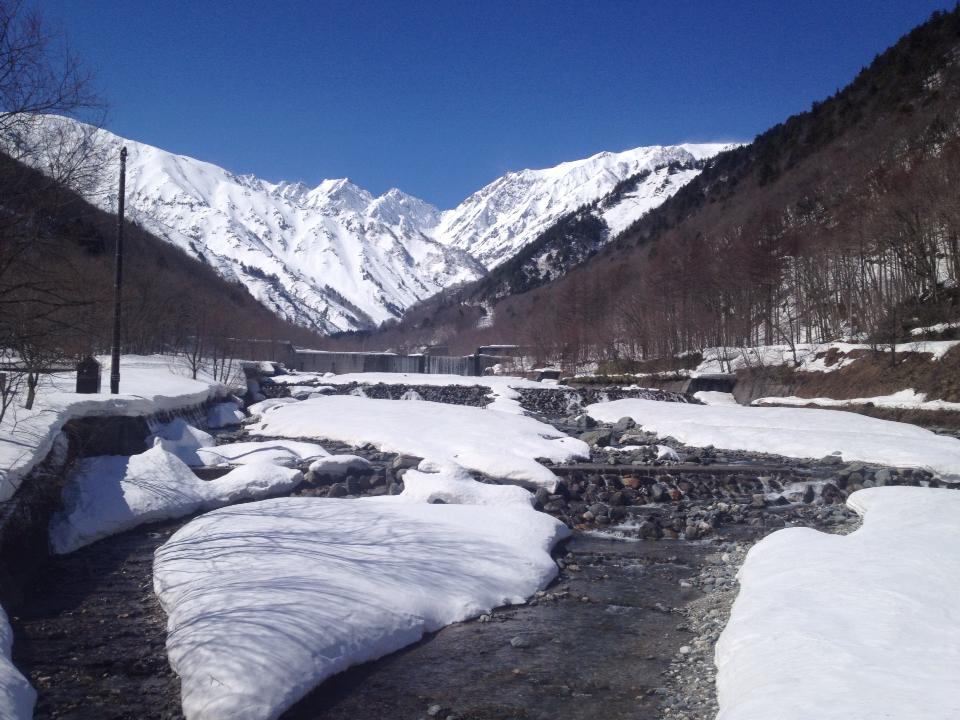 Why Choose to do a Working Holiday in Japan?

The real question is why wouldn’t you? 😂 In all seriousness, aside from the ridiculous amount of snow you’ll get to ride, you will also experience fantastic food, incredible sights, and make some life-long friends.

Working a season in Japan is certainly different from working in Canada, Australia, or Europe. You can definitely tailor the type of season you’d like to have by the resort or town that you decide to base yourself in.

If you’re looking for a busy area with lots of other westerners and plenty of nightlife, I would suggest you look into working in either Hakuba or Niseko. Be aware that these days, it’s most likely that the only thing that will feel Japanese about these areas is the Japanese powder.

On the other hand, if you’re looking for a quieter, more cultural aspect to your season in Japan, you should look into working in places like Myoko Onsen, Nozawa Onsen or Furano. I found these places to have a really nice mixture of western and Japanese vibes. You know you’re in Japan, but you won’t face drastic culture shock, or only be able to get around speaking Japanese.

Will the Language Barrier be a Problem?

I’ll be honest. At the beginning of my season in Hakuba, I felt a bit of culture shock. This was 7 years ago though 😱, and I have since been back to Hakuba and it’s become a lot more westernised.

However, in all my trips to Japan over the years, I’ve only ever found the language barrier confronting once or twice. One of these times was in Tokyo at a small metro station that didn’t have any maps that weren’t in Japanese characters 😬. I was lugging around 50kg’s of luggage with me, and starting to panic.

Luckily, a lovely Japanese businessman asked me if I need help. He helped me buy the right ticket, and told me which train to get on and where to get off. So lovely!

I’ve also had Japanese businessmen running down the street across from me yelling ‘I help you! I help you!’ simply because I’m standing still looking at a map. My boyfriend has been congratulated when he remembered how to say something as simple as ‘Yes’ in Japanese.

So you see, while the language barrier can be confronting at first, it really is not a problem at all. Japanese people are amazingly helpful. Don’t be afraid to ask for help! Most will jump at the opportunity ☺️.

Applying for a Working Holiday Visa

The visa process for Australian’s is not particularly strict or difficult. but they do require a lot more information than some other countries.

Other than the usual required documents such as your passport, resume (or CV), proof of funds, and flight itinerary, you’re also required to submit two other documents with your application. These are a “proposed schedule” and a letter explaining why you wish to travel to Japan as a “working holiday maker”.

The “proposed schedule” is a chance for you to show that you have put some thought into your trip. List places that you have researched and know you’d like to visit and why. They basically want to know that you’re not just coming to Japan to work as much as possible, and leave with their money. You’d be doing yourself a complete injustice if you did that anyway! 🤷🏼‍♀️

Hot Tip: You must be an Australian citizen residing in Australia at the time of your application. So if you’re travelling or residing abroad, you may need to return to Australia to apply for your visa. Of course, this may have changed since the time of writing, so please double-check the official website before starting the process.

Finding a Job in your Chosen Town

I like to think that my method of finding work overseas is tried and true. Head straight to Google and search “Jobs in … ” (insert where you want to work 😂). This is exactly how I got my job in Hakuba.

Hot Tip – Many resort specific jobs like ski patrol and lift operators, are taken by Japanese locals. Especially in the smaller areas like Myoko, and even Hakuba. With this in mind, you’re better off searching for work with western businesses or restaurants who own and operate in the resorts village. The only exception to this rule is if you’re a ski instructor.

I would definitely recommend securing employment before you get to Japan. I’ve never met someone who went to Japan intending to work without already having a job, but I’m sure it does happen. I would recommend to start looking and applying for jobs around late July or early August at the latest.

In my experience, most employers will have staff accommodation either on their premises or nearby for you to live in. At the very least, they’ll be able to point you in the right direction (bear in mind, they do this every season!).

You will be expected to pay rent, and some lodges even include meals as well. For a shared room in a lodge with around 30 other people, I paid 15,000 yen per month. The lodge also included three meals a day at around 950 yen per day. This is certainly a lot cheaper than eating out, or organising your own meals, but you do have to eat whatever is on the menu.

If you expect to pay between 40,000 and 50,000 yen per month for accommodation and meals, you should be just about right. And, if you can find a place with this at your doorstep… you’ll be laughing! 😍

How Much Will I Get Paid?

If you’re already a seasoned season worker, you’ll know that the pay is rough. At the end of the day, it is about the lifestyle over the money but you still need to earn enough to survive 😂.

On my working holiday in Japan, I worked 5 days a week in a cafe from 8am til at least 3pm. I didn’t really have time to go riding on work days, which was a bummer. I think I earnt 900 yen per hour… which is equivalent to $11 AUD. Ouch.

The good news is, the cost of living in Japan is not particularly high, so you don’t need a lot of money. You can save money, but it’s unlikely to be a big chunk. I would recommend heading over with some savings, so you don’t need to worry about money, and can enjoy yourself stress-free!

How Long Does the Season Last For?

If you plan to work on Honshu, at Hakuba, Myoko or Nozawa, you’ll most likely be working from mid-December until late March. They don’t see the longest season down there. Realistically, work will only be busy for January and February before quietening down again.

Whereas, if you decide to head north and work in Niseko or Furano, you’re more likely to get a longer season running from mid-December to late April! Again, it will quieten down a lot in March, but there will still be snow and Japanese tourists around.

Five More Insider Tips to your Working Holiday in Japan

#1 Actual Deep Powder Can be Tough to Ride

If you’ve never experienced ‘real’ deep powder before, you should expect to get a little frustrated the first few times riding in it. I spent my first day in powder falling over literally every three turns. I’m not even lying 😂.

You need to shift your stance backward slightly to keep the tips of your ski’s or snowboard toward the surface. It’s an absolute leg burner!

It will be an absolute sacrilege if you don’t go all out with trying all the Japanese foods. Some of it is weird, and not enjoyable at all. But most of it is amazing! It’s also a lot cheaper to eat Japanese food, rather than sticking to the western restaurants. You’ll get far better value for money! The ‘western’ food in Japan isn’t that good anyway, I promise.

#3 Learn Some of Their Language

If it’s one thing that Japanese people love, it’s an English speaker attempting to speak Japanese. They love it! Most of the general phrases like hello and goodbye, and please and thank you, are really easy to learn and remember.

The best way to learn is to make friends with the locals! I learnt way more Japanese than many of my friends, because I had Japanese co-workers and even Japanese customers. And, my western friends were jealous because they didn’t have the same opportunity to learn.

Tipping is absolutely not a thing in Japan. It’s even considered disrespectful. It’s never happened to me, but I’ve heard stories of restaurant staff chasing customers down the street with their small change instead of accepting it as a tip.

Drugs are extremely illegal in Japan, and there is a zero-tolerance policy towards them. If you’re caught with drugs, you can be deported immediately. What a way to ruin your season!

They’re also supposedly hard to come by, so it’s probably better to leave any of those kinds of expectations at home. Anyway, you can have a wayyyy better time with 200 yen Chu-hi’s. You’ll see what I mean! 😬😂

Most importantly, you need to remember that you’re going to be living in a country that is built on respect. The only real incidences that occur in Japanese ski towns are caused by westerners of ‘Gaijin’ (an outsider). I know that I was super embarrassed anytime something occurred.

Be respectful, be friendly, and learn from the Japanese culture, and I can guarantee, you’ll have an amazing experience in Japan.

Have you done a season in Japan? I would love to hear what your experience was like! ☺️

Whether you’re heading to Japan for a season, or just a holiday, you may find these other posts helpful:
– ‘The In’s & Out’s of your First Ski Trip to Japan’
– ‘What to Expect from the Land of the Snowiest Winters on Earth!’
– ‘Backcountry Touring in Japan’